Code Racing Developments’ Antoine Leclerc and Loïc Villiger scored their first outright race win of the season after coming out on top of a nail-biting first GT4 European Series race at Spa-Francorchamps today.

After a tough opening stint, Villiger resisted massive pressure from Romain Monti’s CMR Toyota over the final third of the race to secure the duo’s first victory, which comes right off the back of Code’s first Pro-Am class win of the season last time out at Misano.

Monti and team-mate Antoine Potty so nearly went from sin to win after crashing out of qualifying, but the pair will be pleased with their recovery to second, ahead of Roee Meyuhas and Erwan Bastard’s Saintéloc Racing Audi, which ended its recent barren run with a podium.

W&S Motorsport’s Mikhail Loboda and Andrey Solukovtsev celebrated their first Am class win of the year with a comfortable run to 22nd overall in their #37 Porsche 718 Cayman.

Leclerc and Villiger’s route to victory at Spa was far from easy, despite the fact their Alpine somehow led the majority of the opening race.

Leclerc was the star of a disrupted qualifying session that caught out many of the title contenders, timing his run to pole perfectly around the red flag that wrecked so many crews’ plans.

The #36 A110 Evo shared the front row with Hendrik Still and Max Kronberg’s W&S Motorsport Porsche 718 Cayman, and the two cars would play out a superb opening fight as Still crawled all over Leclerc’s bumper before diving for a gap into Pif-Paf. That move delayed Leclerc and allowed Etienne Cheli’s CMR Toyota to also slip past, demoting Leclerc to third.

Cheli then attacked Still, getting alongside midway through Les Combes, just as Still moved across to defend. There was contact and when the Toyota went to turn into Speaker’s Corner, the car refused, running straight into the gravel with damage. That summoned the only safety car of the race, and crucially bunched the pack up right before the pit window.

When racing got underway again there was drama as Still’s leading car appeared to cut out, forcing the German to park it despairingly at the side of the track. That handed the lead back to Leclerc, just as he pitted to hand to Villiger.

Villiger wasted no time in blasting past Eric Debard’s Akkodis ASP Team Mercedes-AMG on the Kemmel Straight to resume the lead, Debard having briefly rejoined ahead thanks to a long stint from pro team-mate simon Gachet.

But the big story was who followed Villiger past the Mercedes-AMG. Antoine Potty and Romain Monti endured a terrible qualifying session, with Potty crashing out at Speaker’s Corner and losing his fastest lap as a result of causing the red flag. Their #66 Toyota started back on row 12 as a result, but Potty put in a great opening stint to bring the GR Supra up the order before handing to Monti. 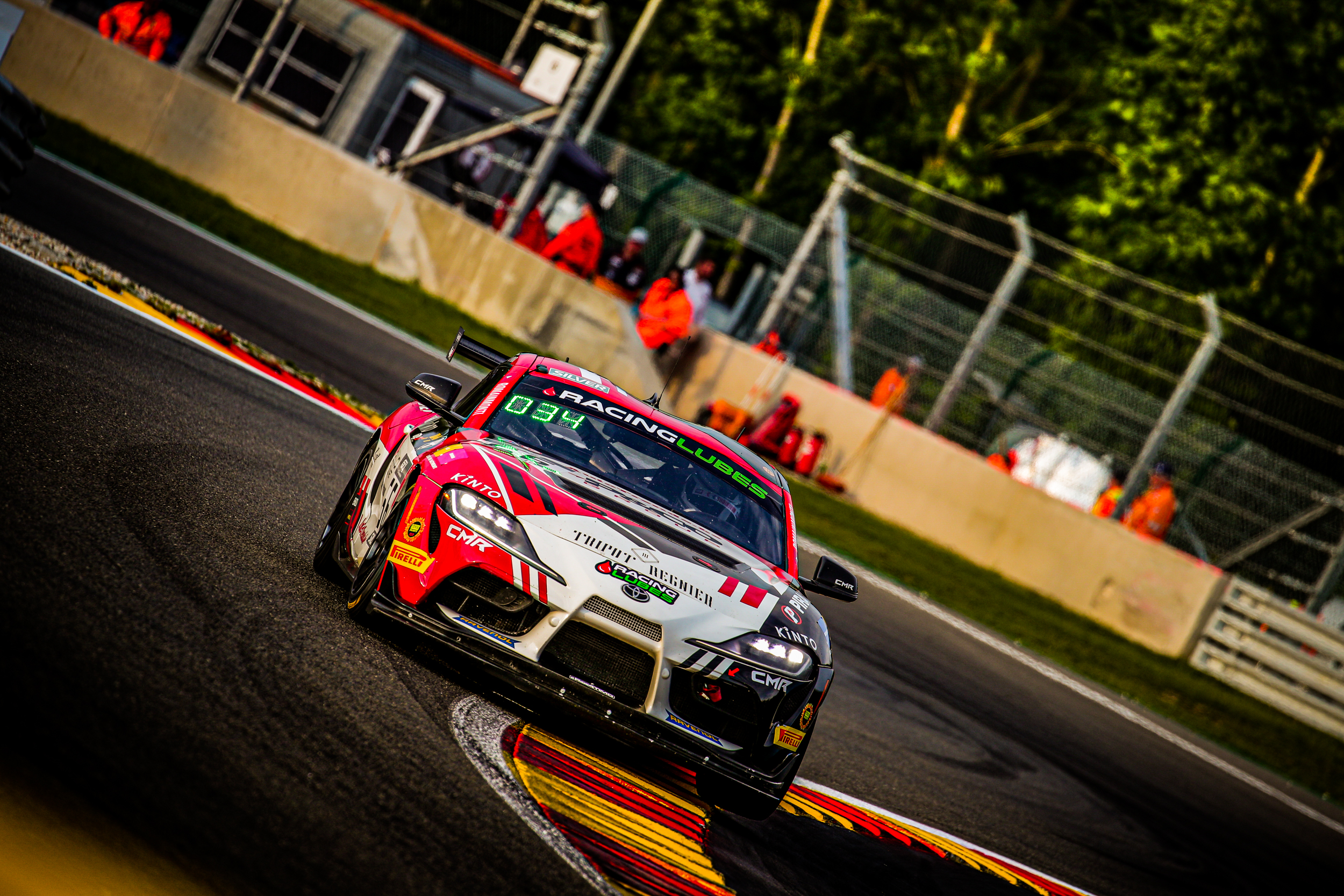 The CMR team opted to use its joker pit stop in the busy pit lane, allowing the car to shave a second off its mandatory stop time and Monti rejoined third, then blew past Debard to chase the lead Alpine.

What followed was an incredible cat and mouse battle as Monti piled the pressure on amateur driver Villiger, repeatedly attacking through Blanchemont and the chicane. However, Villiger kept his nerve to secure a superb victory.

The fight for third was just as thrilling, as Erwan Bastard’s Saintéloc Audi and Will Burns’ Borusan Otomotive Motorsport BMW went side-by-side up Eau Rouge before Bastard finally managed to get a pass done into Les Combes.

Silver Cup championship leaders Lluc Ibañez and Enzo Joulié took fifth, and third in class, in the #15 NM Racing Team Mercedes-AMG, which helped their championship challenge hugely as their rivals hit trouble. Gus Bowers and Konstantin Lachenauer could only manage eighth in class after a tough race in the middle of the pack after a difficult qualifying, with the second Racing Spirit of Léman Aston Martin Vantage of Akhil Rabindra and Tom Canning right behind them.

With Leclerc and Villiger way up the road and winning overall, the next-best Pro-Am pairing was Alex Fontana and Ivan Jacoma’s Centri Porsche Ticino Cayman in eighth overall, which again has helped them gain huge ground in the championship after trouble for Jim Pla and Jean-Luc Beaubelique’s Akkodis ASP Mercedes-AMG. The Pro-Am championship leaders were put to the back of the grid for changing their battery during qualifying in an attempt to solve an electrical issue. The pair did a fine job to climb to 17th overall from 53rd on the grid and salvage fourth in class, behind the Saintéloc Audi of Gregory Guilvert and Fabien Michal. 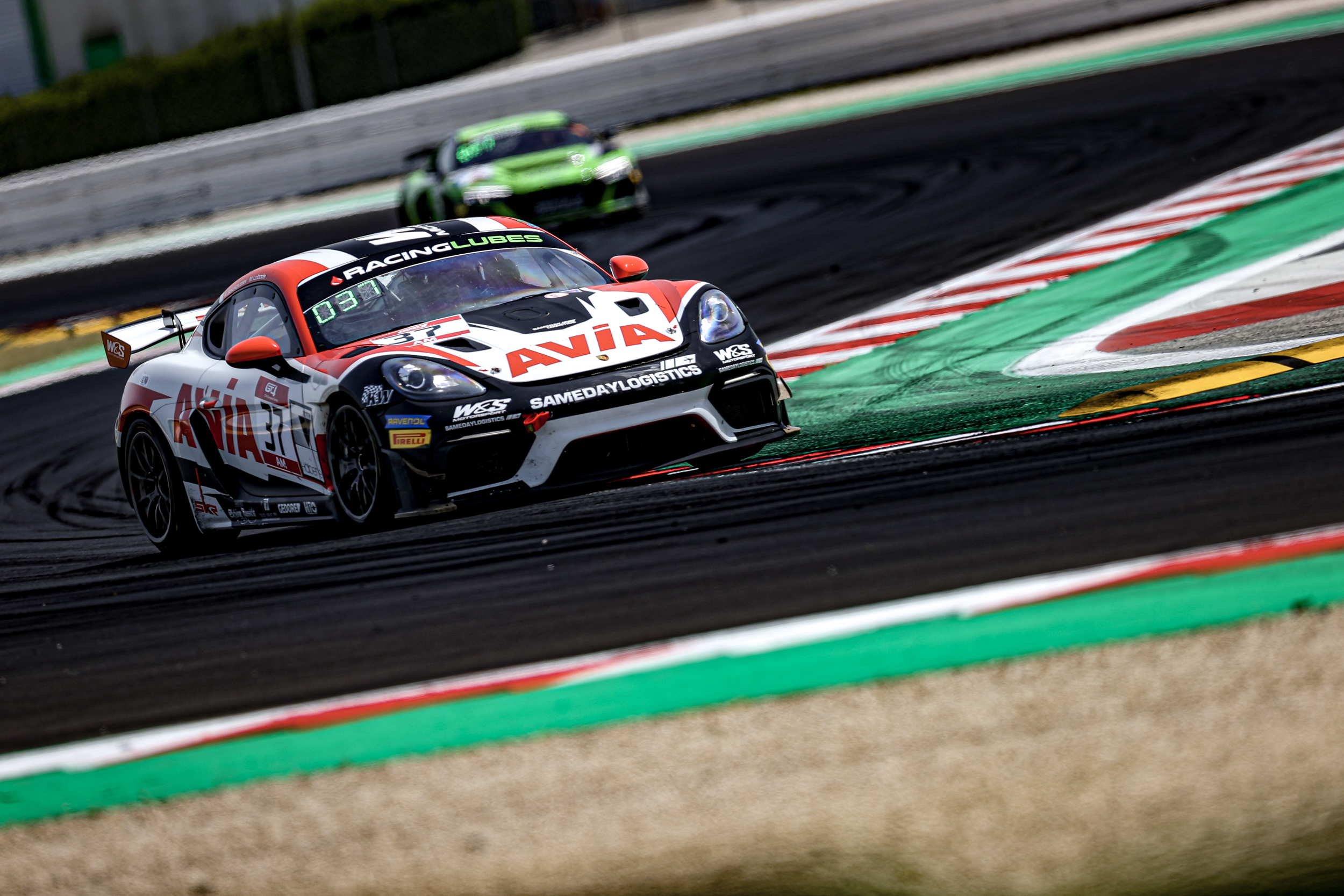 A stunning qualifying performance set W&S Motorsport pairing Mikhail Loboda and Andrey Solukovtsev up for a dominant run to victory in the Am class. A wonderful lap in tough conditions from Loboda helped the #37 Porsche start on the second row and, even if the car would inevitably drop back against the pro drivers, Loboda held a place within the top 10 for much of the opening stint before handing to Solukovtsev to bring it home well clear of the closest class opposition.

The second race of the GT4 European Series takes place at 10:10 on Saturday morning, before the start of the TotalEnergies 24 Hours of Spa.