After a difficult last few rounds, Erwan Bastard and Roee Meyuhas showed they aren’t out of the fight for the GT4 European Series title just yet, guiding their Saintéloc Racing Audi to victory in a thrilling second race at Spa-Francorchamps.

Bastard and Meyuhas came out on top of a three-car fight for victory on the final lap to score both the Saintéloc team’s and Audi’s first overall win of the season. Likewise the battle for Pro-Am honours also went down to the final corners as Fabien Michal and Gregory Guilvert doubled Saintéloc’s glory by fending off Loïc Villiger and Antoine Leclerc’s Code Racing Developments Alpine.

And, if things couldn’t get better for Saintéloc, it won the Am class too, with Gregory Curson Faessel recovering from an early incident to claim the glory. 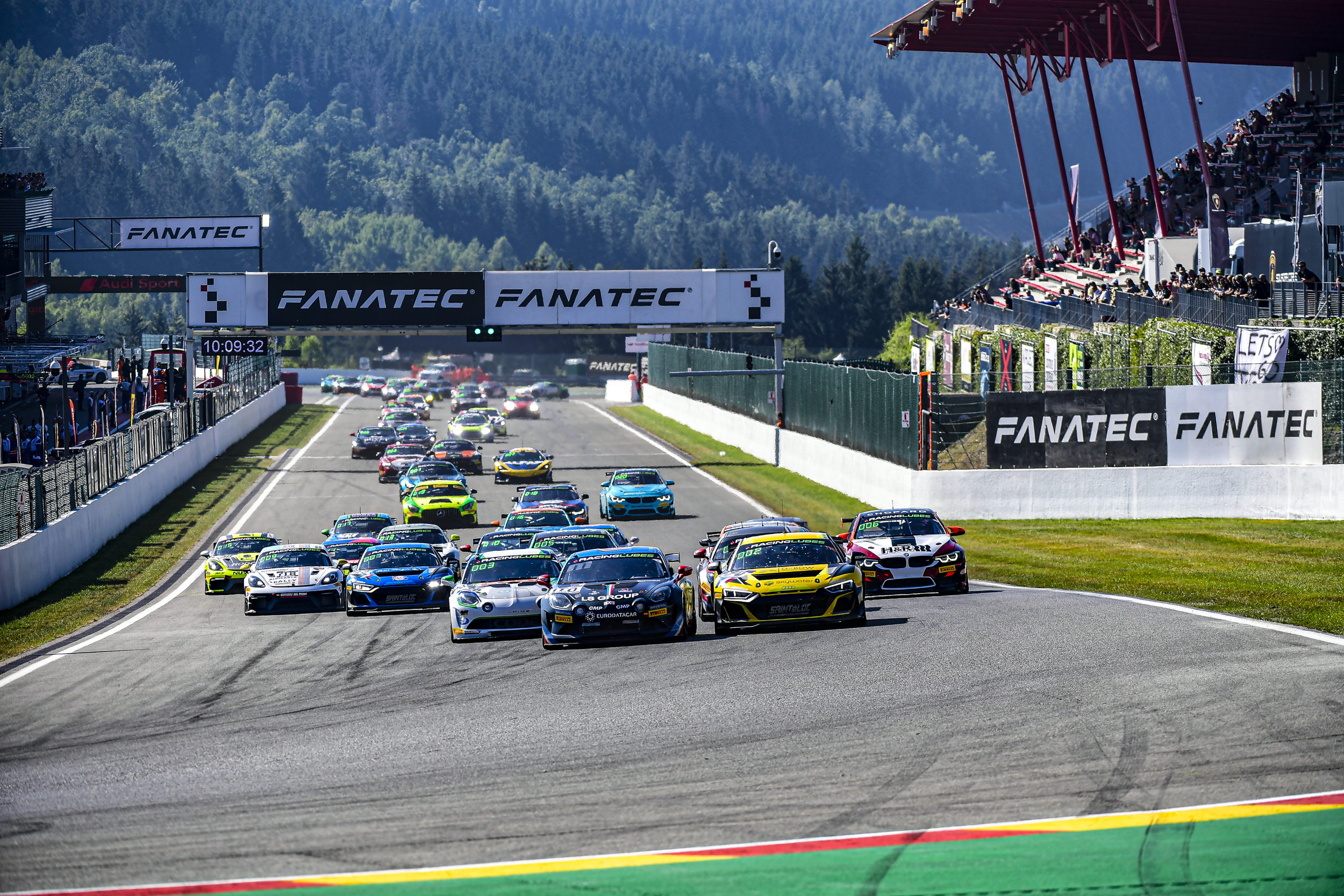 Having suffered with overheating issues at both Circuit Paul Ricard and Misano, Bastard and Meyuhas were perhaps owed a strong weekend, and they capped their Belgian break with a first win of the season in a superbly unpredictable finale.

After a great run to second overall during Saturday evening’s first race, Bastard would be one to watch for Sunday’s finale, with the #14 Audi R8 LMS starting second behind Simon Tirman’s pole-sitting Autosport GP Alpine.

The start itself went fine, with Tirman slotting into the lead ahead of Bastard, but the run through La Source wasn’t so smooth, with nine cars becoming involved in a skirmish in the pack behind. With cars stranded on circuit and in the gravel, the safety car was called to aid the clean-up.

The race went green with 40 minutes remaining, and it didn’t take Bastard long to make a move for the lead, drafting past Tirman into Les Combes after getting a tow down the Kemmel Straight.

With racing resuming so close to the pit window opening, the entire lead pack pitted as one. Saintéloc opted to play the #14’s one-second pit stop joker, keeping the car firmly in the mix and allowing Meyuhas to jump straight past Sancinena, who had taken the Alpine over from Tirman but couldn’t keep pace with the leaders.

Meyuhas then set about building a comfortable gap as Sancinena fell back, but the American’s hard work was undone when the #278 Porsche stopped at Blanchimont after a technical failure. That summoned another safety car, which bunched the pack ahead of a one-lap sprint to the flag.

When racing resumed, Meyuhas couldn’t shake off the attentions of Lluc Ibañez in the championship-leading NM Racing Team Mercedes-AMG, which had worked its way into second after some fine early work from Enzo Joulié. Ibañez attempted to run around the outside of Meyuhas for the lead at Pif-Paf, only for the Audi to hold the line into Campus. In doing so he opened the door for Mike David Ortmann to dive past the Mercedes to steal second in the PROsport Racing Aston Martin he shares with Hugo Sasse.

Meyuhas just did enough to hold on to the flag, ahead of Ortmann, Ibañez and Michael Schrey/Gabriele Piana’s Hofor Racing by Bonk Motorsport BMW M4. 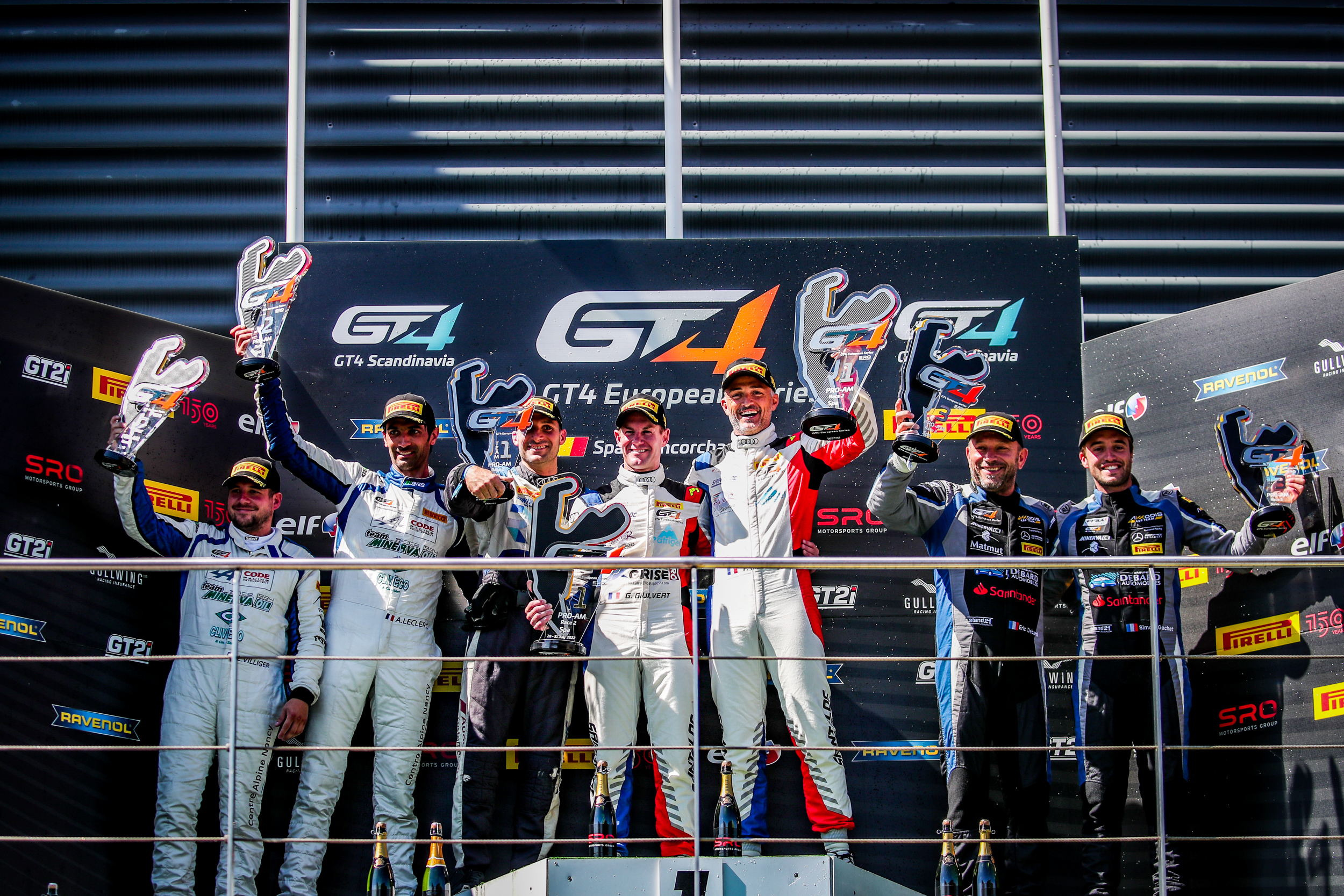 Pro-Am: Michal and Guilvert hold on to double Saintéloc’s glory

The fight for Pro-Am victory appeared to be heading the way of Code Racing’s Alpine for much of the race. Having won the first race outright, Villiger and Leclerc looked odds-on to take class glory with Villiger holding third place overall throughout the entire first half of the race. However, a delay in the pits cost the car badly, allowing the #42 Saintéloc Audi of Michal and Guilvert to jump ahead in the stops.

Leclerc eventually rejoined a few places behind Guilvert, but successfully worked his way onto the tail of the Audi in time for the last-lap shootout. Leclerc got a great run down the Kemmel Straight and looked to have a move done into Les Combes, only to run wide and allow Guilvert to fight back through the second part of the chicane. Guilvert then kept things neat and tidy to secure the victory. Simon Gachet and Eric Debard completed the podium in their Akkodis ASP Team Mercedes-AMG, ahead of Robert Haub and Gabriela Jílková’s Drago Racing ZVO Mercedes.

It was another tough race for the class championship leaders, Jean-Luc Beaubelique and Jim Pla. After being dumped to the back of the grid for changing the battery on their Akkodis ASP Mercedes during qualifying, the early safety car limited Beaubelique’s chances to make progress from 54th on the grid. The pair did manage to climb to 18th at the flag, but it was only good enough for ninth in class.

Akkodis ASP’s woes were made a bit less painful by trouble for their closest championship rivals. Ivan Jacoma and Alex Fontana’s Centri Porsche Ticino Cayman was one of the casualties of the first-lap chaos, retiring with damage, while Kenny Herremans and Dante Rappange could only manage sixth in class in the V8 Racing Chevrolet Camaro. 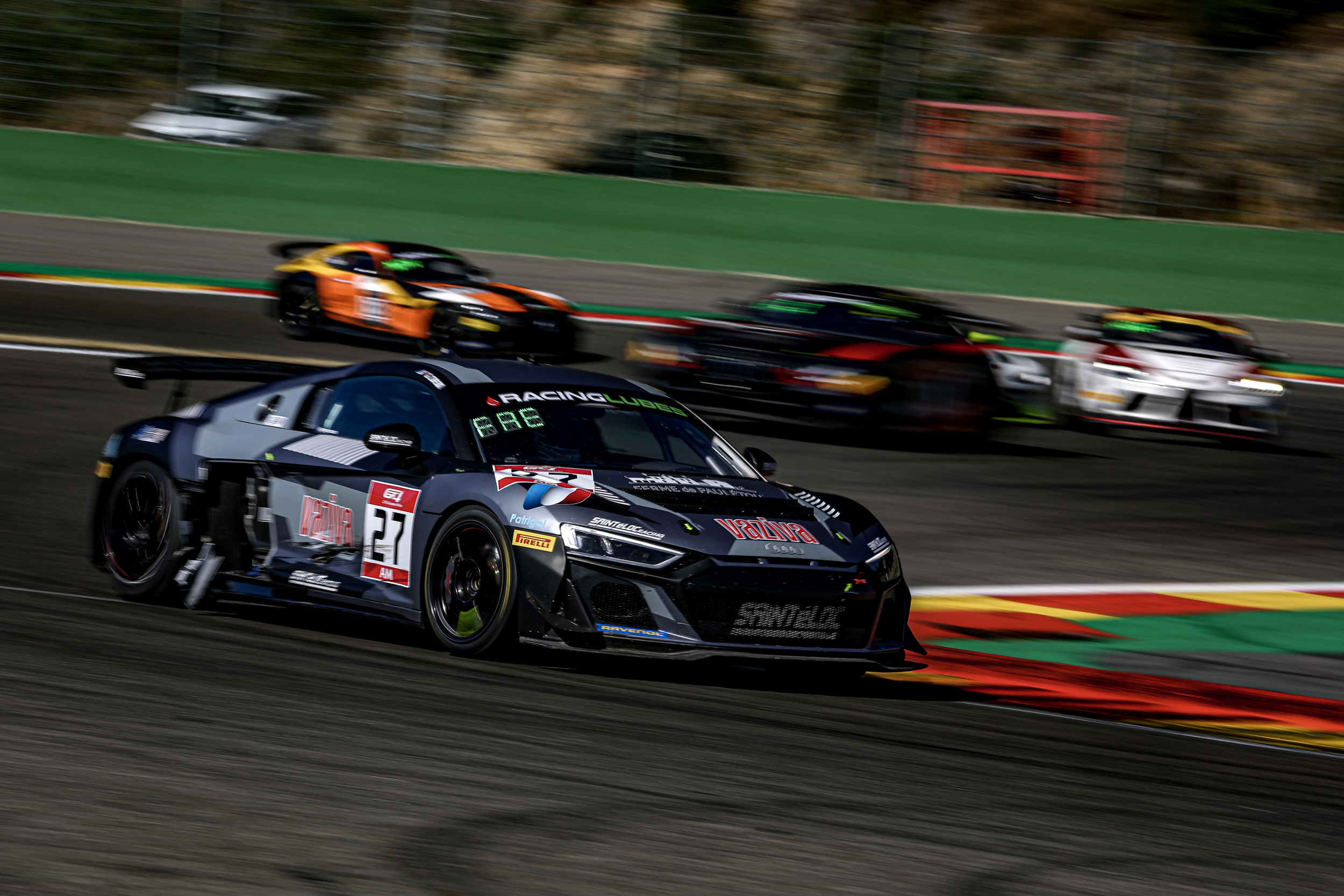 Am: Saintéloc does the hat-trick after Faessel’s solo show

Another car caught up in the lap-one chaos was Am class pole-sitter Gregory Curson Faessel, who was tipped into a full 360-degree spin, immediately costing him the class lead.

However, Faessel then began a superb fightback, working his way back up the order before slipping past NM Racing Team’s Aleksandr Vaintrub just before the pit window. Faessel’s win was essentially secured when Vaintrub/Stanislav Safronov were handed a stop-go penalty for a short pit stop, dropping that car to ninth in class.

This allowed Henrik Lyngbye Pedersen and Markus Lungstrass into second in their Team Spirit Racing Aston Martin, with Benjamin Ricci dragging past Wilfried Cazalbon to snatch third in the championship-leading #61 Akkodis ASP Mercedes he shares with father Mauro. Cazalbon and Julien Lambert at least put their nightmare Misano weekend behind them by adding fourth to a podium on Saturday.

The next round of the GT4 European Series takes place at Hockenheim in Germany on September 2-4.