After scoring their first race victory of the season last time out at Misano, Code Racing’s Antoine Leclerc and Loïc Villiger continued their strong form by grabbing race one pole at Spa-Francorchamps. Autosport GP then doubled Alpine’s glory, with Simon Tirman and Pierre Sancinena grabbing top spot for race two.

Both qualifying segments were interrupted by red flags, but the field had more than enough time to produce a thrilling battle for the outright pole positions across both halves.

Antoine Leclerc emerged ahead of a six-car fight for supremacy in the first session to snare race one pole for Code. Initially, Michael Schrey set the benchmark in the guest Hofor Racing by Bonk Motorsport BMW M4, before he was surpassed by Vincent Andronaco in the #22 Allied Racing Porsche 718 Cayman. Then came the Toyotas, with Antoine Potty briefly going fastest before CMR team-mate Etienne Cheli slipped ahead. American driver Kenton Koch put Aston Martin into the mix by briefly leading in the #5 Team Spirit Racing Vantage, before Leclerc eventually asserted himself just before the red flags flew when Potty got things wrong into Speaker’s Corner and smacked the barriers.

The clean-up left no time for a restart, cementing Leclerc’s pole. Simon Gachet put the #81 Akkodis ASP Team Mercedes-AMG second, with Hendrik Still grabbing third in the W&S Motorsport Porsche. Andronaco wound up fourth, ahead of Jean-Baptiste Mela’s Autosport GP Alpine. Mikhail Loboda did a superb job to put W&S Motorsport’s #37 Porsche sixth overall and claim Am class pole, ahead of the fastest Silver Cup entry of Koch. Roee Meyuhas will start the #14 Saintéloc Audi eighth overall (second in the Silver order), with Cheli ninth. Julien Briché rounded out the top 10 for JSB Competition, which has swapped to a Mercedes-AMG for the first time this weekend.

The early end to the session caused some upsets, with many title contenders out of sorts in the order. Silver Cup leader Lluc Ibañez was just 12 fastest (third in class) in the #15 NM Racing Team Mercedes-AMG, while runaway Pro-Am leader Jim Pla was just 16th (ninth in class) with his Akkodis ASP AMG car distinctly off-song. Gus Bowers also suffered, down in 29th overall (11th in class) in the Racing Spirit of Léman Vantage that sits second in the Silver Cup championship. 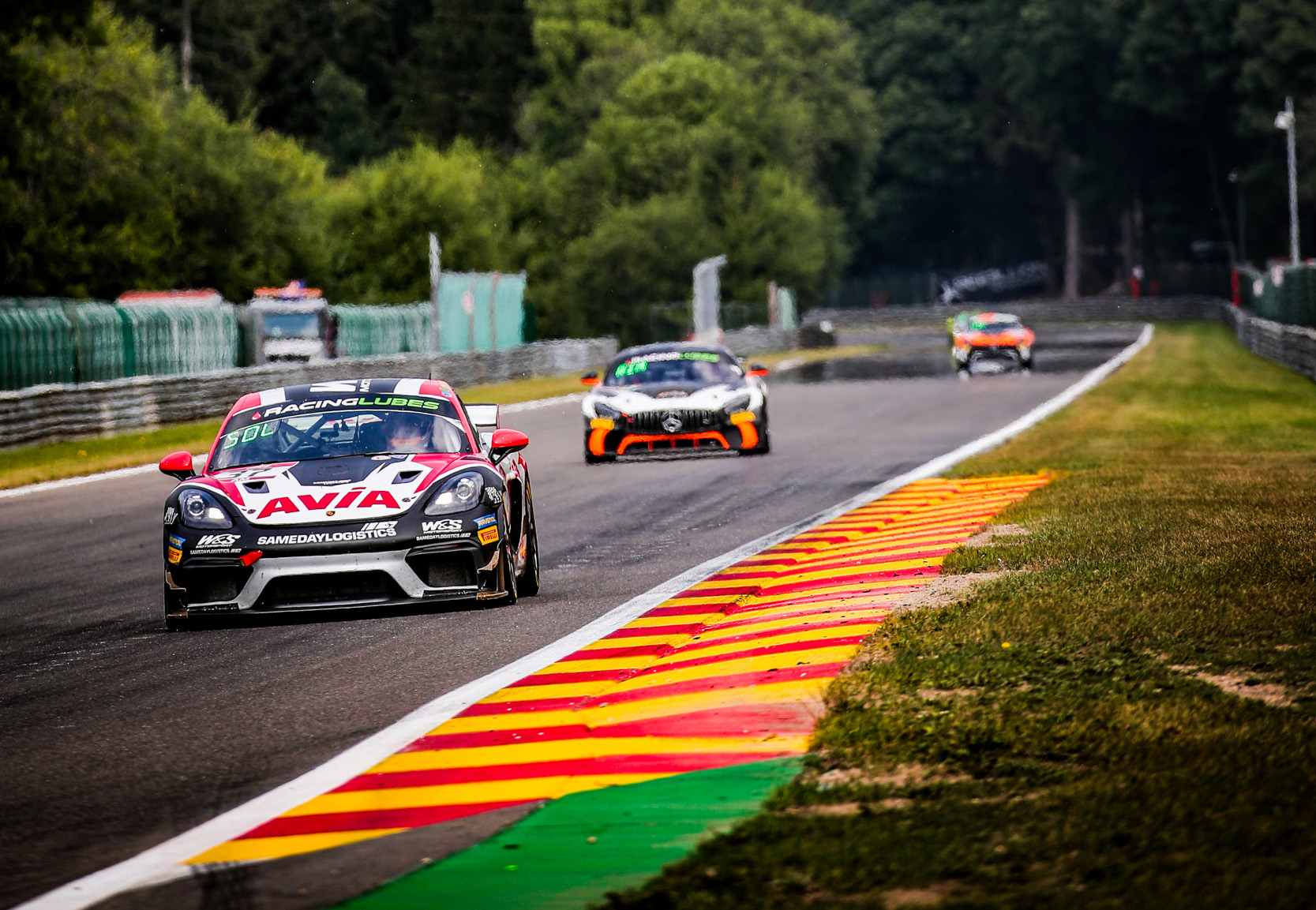 The Autosport GP Alpine of Simon Tirman and Pierre Sancinena had been looking a threat ever since it topped second practice, and Tirman made no mistakes to grab race two pole from a frantic second session.

The crews had just got up to speed when Andreas Mayrl suffered a heavy crash approaching the chicane in the #22 Allied Porsche that Andronaco had put fourth fastest in the first session. The red flag stoppage left a 10-minute sprint once the session got going again.

Ivan Jacoma led the way early on in the #718 Centri Porsche Ticino Cayman, before Hugo Sasse put the #24 PROsport Vantage top. Enzo Joulié then went fastest in the #15 NM Mercedes-AMG, before Tirman came through with a mighty effort to put the #110 Alpine over half-a-second clear. After that, the contest was over.

Erwan Bastard got closest to the benchmark, grabbing second on his last lap in the #14 Saintéloc Audi. Villiger backed up Leclerc’s great work by finishing third overall and grabbing Pro-Am pole.

Joulié was fourth, with Will Burns putting the #12 Borusan Otomotiv Motorsport BMW M4 fifth ahead of the Hofor car in the hands of Gabriele Piana. Fabien Michal was seventh in the #42 Saintéloc Audi ahead of Sasse, Jacoma and Akhil Rabindra’s Racing Spirit of Léman Aston.

The session again brought trouble for the title contenders. Jean-Luc Beaubelique was unable to set a lap time in the Pro-Am leading car he shares with Pla as an electrical issue worsened between the sessions. Konstantin Lachenauer fell foul of track limits in the #10 Racing Spirit of Léman Aston and will start just 26th, allied to Bowers' tough session in that car.