Lluc Ibañez and Enzo Joulié moved a step closer to securing this year’s GT4 European Series Silver Cup title after a fine performance at Hockenheim, a determined drive giving the NM Racing Team pair a third victory of the season and an enhanced championship lead.

Ibañez and Joulié’s path to victory in Germany was far from smooth, with the duo having to overturn a grid penalty and survive a tense final few minutes to reach the top step of the podium in their Mercedes-AMG GT4.

Initially it looked like Team Speedcar’s Audi driven by Benjamin Lariche and Robert Consani was on course for the win, having taken pole position and led the early stages, but a penalty for a false start cost them the chance to fight for a first outright victory of the year and opened the door for the NM Mercedes to strike.

Likewise, Akkodis ASP Team’s Jean-Luc Beaubelique and Jim Pla also moved to within touching distance of the Pro-Am crown with their third class win of the year – made possible by a superb early stint from Pla.

Elsewhere, the Am class fight remains the closest of all, with a second win in three races for W&S Motorsport Porsche pairing Mikhail Loboda and Andrey Solukovtsev moving them firmly into a five-way title battle. 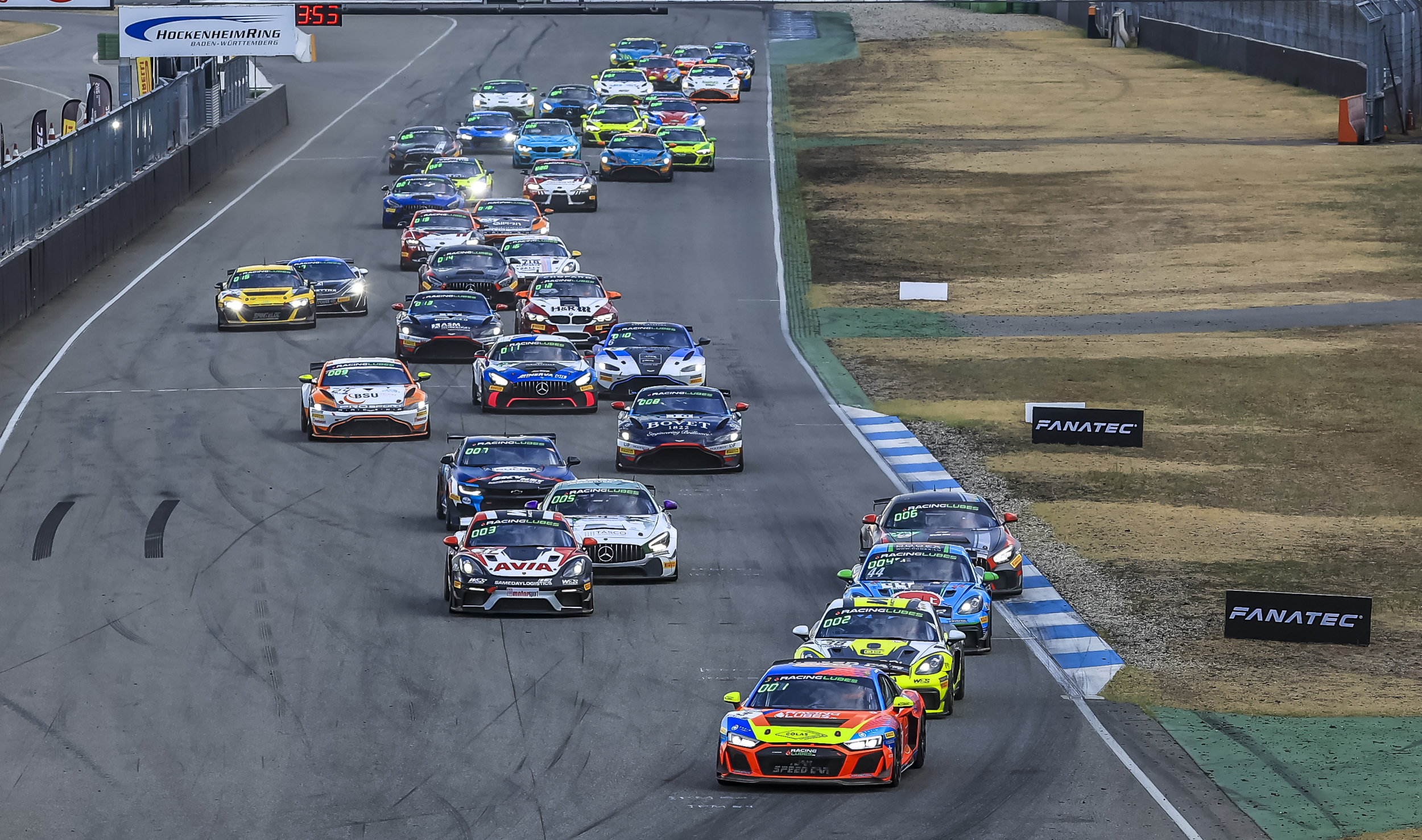 Ibañez and Joulié tighten their grip on the Silver Cup

The weekend initially didn’t look to be going the way of Ibañez and Joulié, who started off struggling for pace in practice and then landed a three-place grid drop for the first outing when Ibañez overtook under yellow flags. However, come race day they successfully put their troubles behind them to score what could be a decisive win in the championship chase.

Ibañez qualified the #15 Mercedes a fine third, so would start sixth after the penalty, yet hardly any would have noticed thanks to a blistering opening lap in which Ibañez rocketed up to third anyway.

And that would get even better when the pole-sitting Team Speedcar Audi in the hands of Lariche was handed a five-second penalty during its pit stop for a false start, which gave the car an immediate advantage over Hendrik Still’s W&S Motorsport Porsche before the race had gone green.

Lariche led the early stages regardless, as he tried to pull enough of a gap to overturn the penalty, but he never succeeded in gaining more than a second’s advantage over both the chasing Porsche and Ibañez.

With things stable out front, the star of the early stages was Pla, who pulled off a string of stunning overtakes to move the #87 Akkodis ASP Team Mercedes-AMG to the sharp end after a tough qualifying. Pla admitted to a few errors in his qualifying performance, and started just 11th, but by lap 10 he was inside the top four and pressuring Ibañez for the podium places. Pla eventually slipped past both Ibañez and Still to run second, which became the outright race lead when Lariche pitted to swap to Consani and serve the car’s penalty.

With clean air, Pla pushed hard to try and build a gap before handing across to Beaubelique. He succeeded to a point, with the car rejoining at the head of the field after the pit cycle, but with the faster Silver class drivers hunting Beaubelique down. 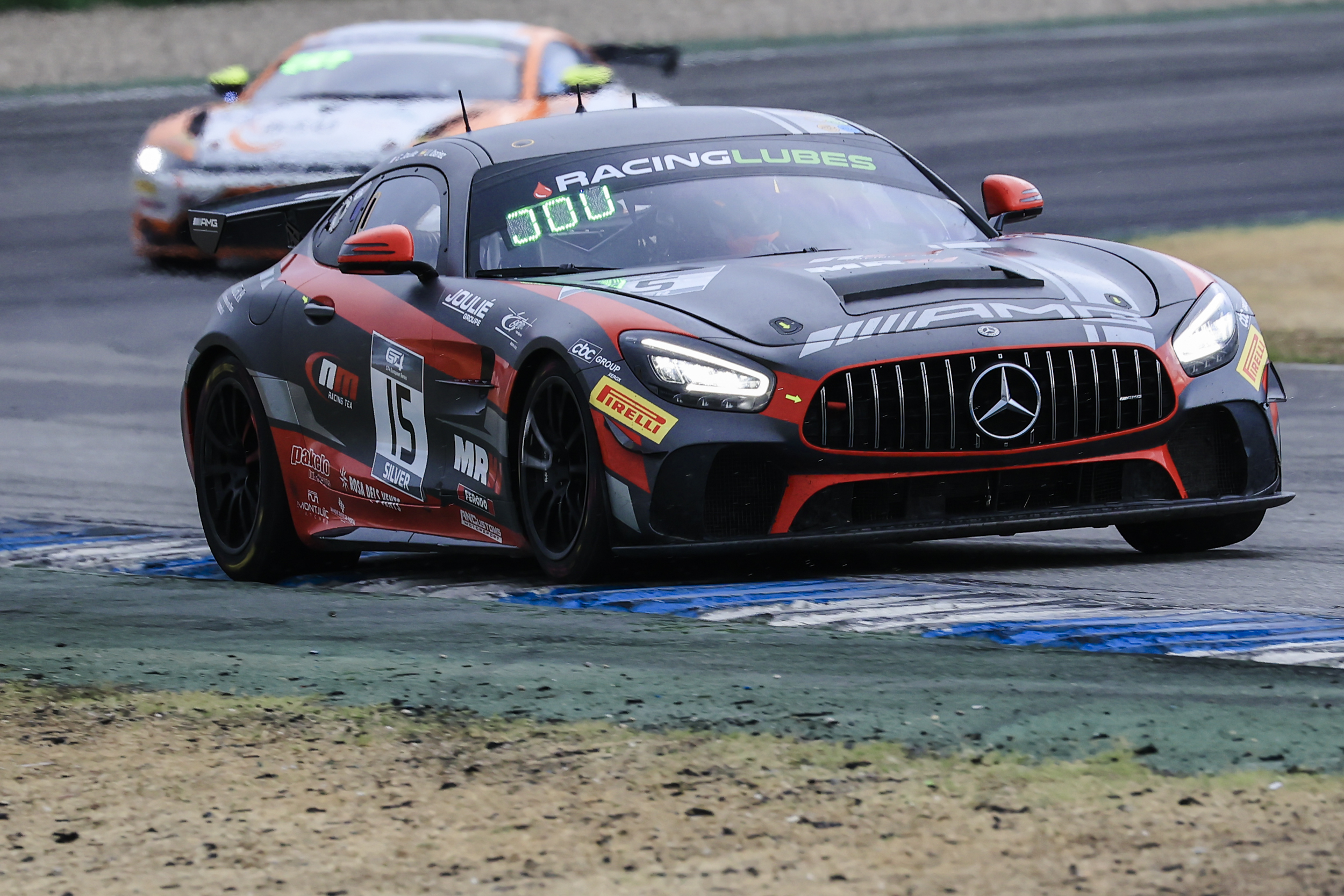 First on the scene was Joulié, who had slipped past Max Kronberg (in for Still) and carved into Beaubelique’s advantage. The move for the lead came into the Sachs-Kurve on lap 24, with Joulié finding room up the inside to snatch top spot, a few minutes before the rain began.

With the track conditions worsening, and a few cars hitting trouble, the safety car was called for the remainder of the race, cementing the win for Ibañez and Joulié. The result hands them a 39-point championship lead.

Some slick strategy from Hugo Sasse and Mike David Ortmann helped PROsport’s #24 Aston Martin to second. A tricky qualifying meant they started ninth but they kept things clean at the start and opted for an early stop in a quiet pit lane. That, combined with them playing their pit stop joker, helped put the car into fourth after the pit window, and Ortmann’s fine pace helped him climb up to second before the arrival of the safety car.

It was a similar story for Gabriele Piana and Michael Schrey, who enjoyed a great charge up from 12th on the grid to finish third after a brilliant overtaking display from both drivers. Lariche and Consani had to settle for fourth after their penalty.

NM’s closest championship rivals both endured tough races, with Racing Spirit of Léman’s Konstantin Lachenauer and Gus Bowers losing time when Lachenauer collided with the Allied Racing Porsche of Moritz Wiskirchen. The Aston ended up fifth in class, right ahead of the Saintéloc Racing Audi of Roee Meyuhas and Erwan Bastard. However, the positions were reversed post-race when Lachenauer was given a five-second penalty for his collision with Wiskirchen, moving Meyuhas/Bastard up to fifth. 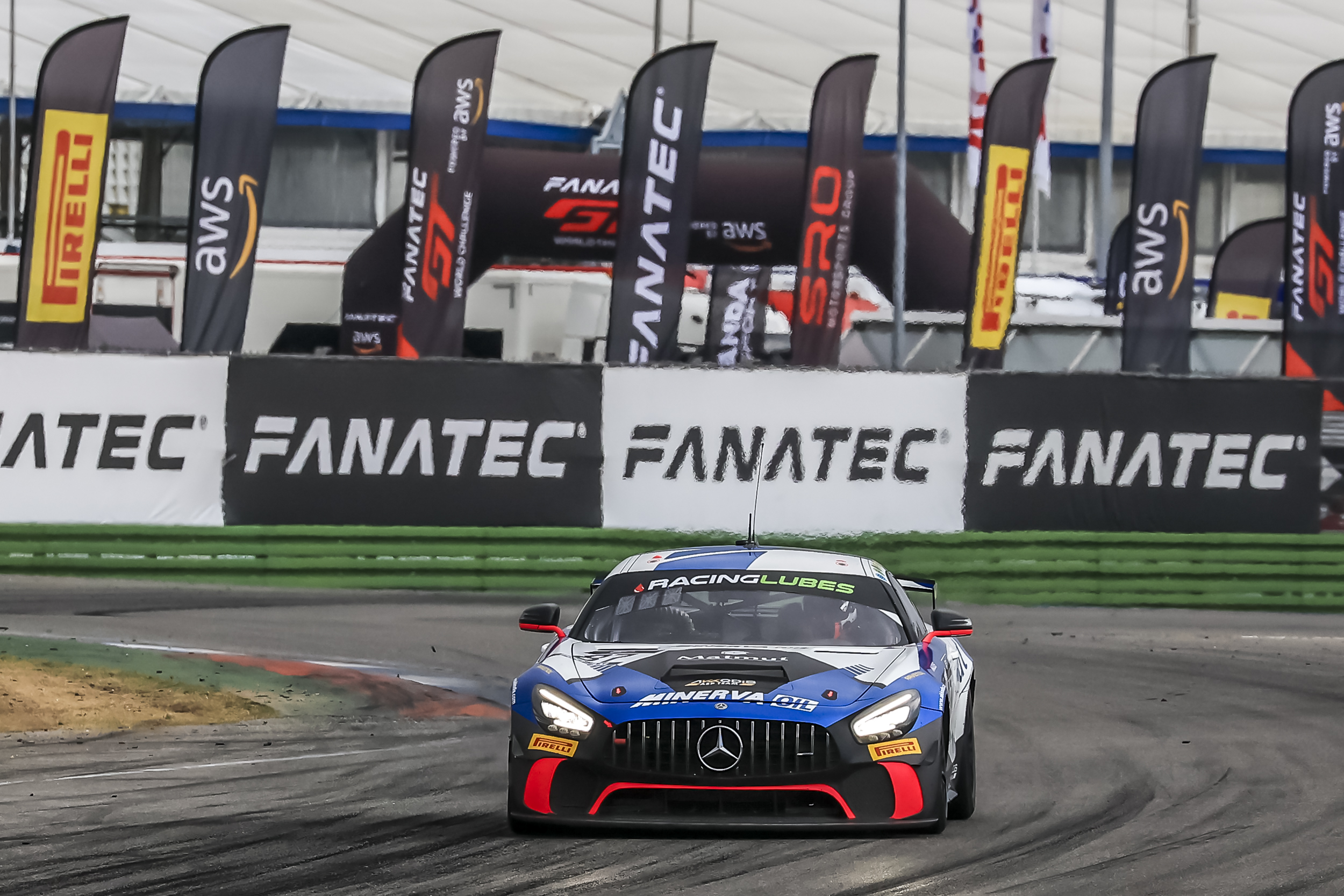 Beaubelique and Pla close in on Pro-Am glory

Despite giving away ground to the Silver drivers, Beaubelique kept things clean for the remainder of the race to finish fifth and secure a third Pro-Am class victory for himself and Pla, further enhancing their championship lead.

Kronberg looked set to threaten Beaubelique for the win, but the safety car ended his chances and the pair finished in formation in fifth and sixth, with the Drago Racing by ZVO Mercedes-AMG of Robert Haub and new team-mate Theo Nouet right behind – the two scoring the team’s first podium of the campaign.

Centri Porsche Ticino’s title-chasing pairing of Ivan Jacoma and Alex Fontana could only manage fourth in class, but were docked 35 seconds post-race for slowing in the pitlane during their mandatory stop. That dropped them to seventh in class, further putting Pla/Beaubelique in the box seat for the championship.

The V8 Racing Chevrolet Camaro of Dante Rappange/Kenny Herremans therefore inherited fourth, ahead of the Greystone GT McLaren of Tim Whale and Adam Carroll, which marked the team's best finish so far this year. The results mean Pla and Beaubelique now lead by 49pts. 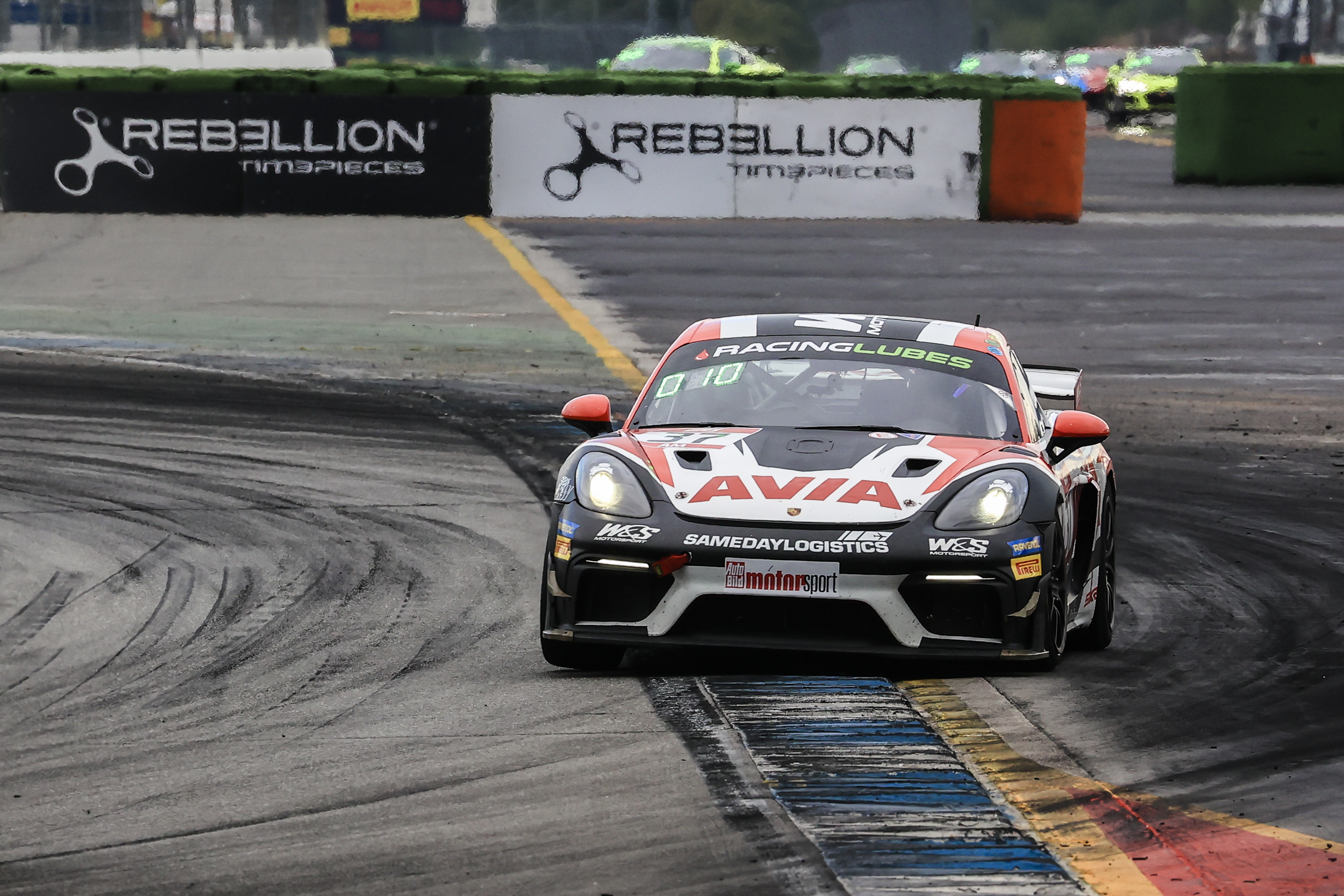 W&S makes it a five-way fight in Am

Having taken their breakthrough class win at Spa, Mikhail Loboda and Andrey Solukovtsev doubled up at Hockenheim, their #37 W&S Motorsport Porsche being the class of the field.

Loboda qualified the car a superb third and, while he slipped back against the higher-graded drivers at the start, did more than enough to stay well clear of his closest class rivals before handing over to Solukovtsev, who stroked the car home in 10th overall.

NM Racing Team’s Stanislav Safronov and Aleksandr Vaintrub were second as Team Fullmotorsport’s Christophe Hamon and Michael Blanchemain kept their title hopes alive with a podium in their Audi R8. Wilfried Cazalbon and Julien Lambert took fourth in the #89 AGS Events Aston Martin to claw back more points from class leaders Benjamin and Mauro Ricci, who could only manage fifth in their Akkodis ASP Mercedes-AMG, meaning they hold a slim five-point advantage.