Two incredibly tight qualifying sessions at Imola produced pole positions for both the Allied Racing Porsche team and Racing Spirit of Léman Aston Martin as the GT4 European Series sparked back into life in Italy.

The disrupted second session was simply too tight to call, with a handful of cars all swapping provisional pole during the closing moments. Then Gus Bowers produced a stunning final lap to snatch the place in the final seconds for Racing Spirit of Léman. Wilfried Cazalbon put in a great performance to lead the Am division in the #89 AGS Events Aston Martin, while Ivan Jacoma put Centri Porsche Ticino’s Cayman out front in Pro-Am.

Andronaco denies Pla in session one

With the professional drivers this year being required to take part in the opening qualifying segment of the weekend, there was a clear favourite for pole heading into the session in the shape of Jim Pla, who had dominated both Friday practice sessions in the #87 Akkodis ASP Mercedes-AMG. However, Vincent Andronaco proved that things can change in a moment in GT4 racing, by putting in a superb lap in the #22 Allied Racing Porsche to deny Pla by a tiny margin.

With track temperatures being relatively low, the field took a while to warm their Pirelli tyres, leading to much change at the top as several drivers took a turn at the top of the times. Eventually Pla asserted himself just past half distance, only to be eclipsed first by Nico Verdonck (PROsport Racing Aston Martin), then Simon Gachet (Akkodis-ASP Mercedes-AMG) before Andronaco nailed his lap to top them all.

Pla attempted to fight back, but hit traffic on his final flying lap and fell just 0.075sec shy of Andronaco’s best. Any further attempt was denied when the red flags finished the session early after Lluc Ibańez’s NM Racing Mercedes-AMG briefly stopped on track after damaging the rear right on a heavy kerb strike.

Gachet held on to third, just ahead of Pierre-Louis Chovet, who secured the Silver Cup pole aboard the #13 Arkadia Racing Alpine. Konstantin Lachenauer was fifth in the #10 Racing Spirit of Léman Aston, ahead of American Kenton Koch in the #5 Team Spirit Racing Vantage. Roee Meyuhas brought Saintéloc’s #14 Audi R8 LMS into seventh, just ahead of Alex Fontana in the Centri Porsche Ticino Cayman.

Tom Canning will start ninth in the #19 Racing Spirit of Léman Aston, while Ibañez had done enough to secure 10th before his Mercedes-AMG hit trouble.

The Am class wasn’t lacking in action either, with Mikhail Loboda’s #37 W&S Motorsport Porsche Cayman securing pole, but only after a multi-car fight. Initially Paolo Meloni led the way in W&S’s BMW entry, before Markus Lungstrass looked to have things under control in the #18 Team Spirit Racing Aston. However, Loboda snuck past to lead the class mid-session and was never bettered. Julien Lambert will start third in the class aboard the #89 AGS Events Aston Martin. 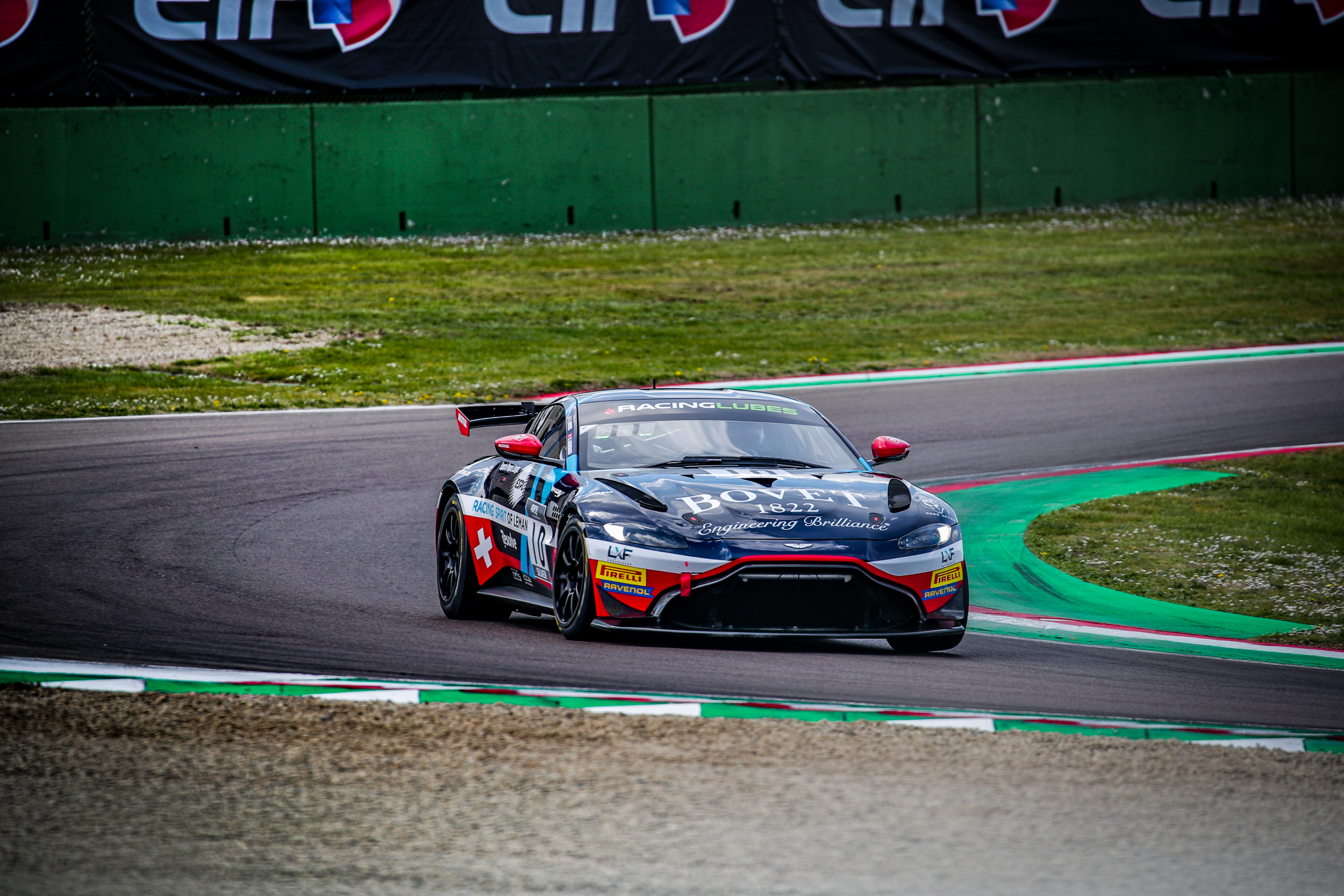 Bowers beats them all at the finish

Having raced a McLaren last season, Gus Bowers showed that he’s fully adapted to an Aston Martin Vantage GT4 already by coming out on top of an action-packed second qualifying to secure pole for the Racing Spirit of Léman team.

After a flurry of early times, things boiled down to a five-minute dash after the session was stopped following a nasty accident for Loïc Villiger in the #36 Code Racing Alpine, which suffered heavy contact with the barriers after contact tipped the car around.

Up until the stoppage, the favourites for pole looked like being either Vincent Beltoise (#29 Mirage Racing Alpine), Johann Boris Scheier (#13 Arkadia Racing Alpine) or Erwan Bastard (#14 Saintéloc Audi R8 LMS), who had been the first car out on track and used the clean air to good effect, pumping in a series of top laps.

But the stoppage left teams with a dilemma. Did they risk another run with so little time to warm the tyres, or stick with what they had? The majority of the field opted to gamble, and it set up a thrilling late fight.

Bowers was first to strike, lowering Bastard’s benchmark by 0.076sec, before Bastard reasserted himself on top with just seconds remaining. It looked done and dusted, until Bowers produced a 1m49.0sec lap, putting him over half-a-second clear right as the chequered flag fell.

Beltoise also managed to demote Bastard in the final moments to line up second, while Akhil Rabindra brought the #19 Racing Spirit of Léman Aston up to fourth.

Wilfried Cazalbon was a superb fifth overall in the #89 AGS Events Aston, claiming Am class pole by a margin ahead of Christophe Hamon, who endured an early spin in the #69 Team Fullmotorsport Audi.