All three GT4 European Series drivers’ championship titles went down to the wire in a dramatic season finale at Barcelona.

While the race wins were shared between Dante Rappange/Kenny Herremans, Hugo Sasse/Mike David Ortmann and Christophe Hamon/Michael Blanchemain, the stories of the race were found further back where the class championships were decided in exceptional circumstances.

By fighting to fifth in their Saintéloc Racing Audi R8 LMS, Erwan Bastard and Roee Meyuhas completed a dream year by snatching the Silver title by a single point, benefiting from heartbreak for the NM Racing Team Mercedes-AMG of Lluc Ibañez and Enzo Joulié.

Jean-Luc Beaubelique and Jim Pla finally got their hands on the Pro-Am championship trophy, despite a spirited effort from Saintéloc Racing’s Gregory Guilvert/Fabien Michal.

Lastly, W&S Motorsport pairing Mikhail Loboda and Andrey Solukovtsev endured a nail-biting finale, having to watch on from the sidelines after their Porsche’s engine failed early on. However, with their rivals failing to make up enough ground, they still secured a hard-earned Am title. 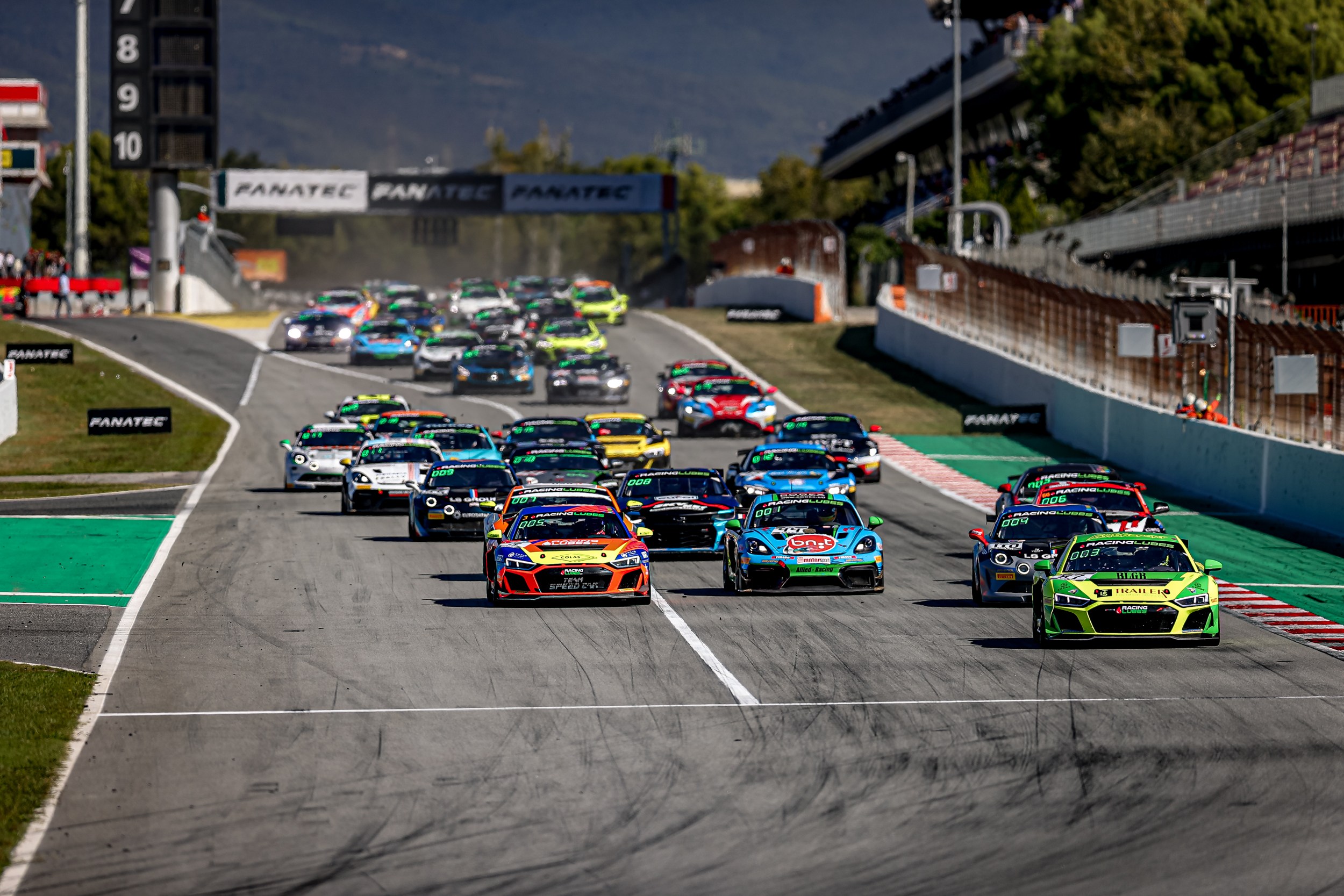 Camaro pounces late on, as Bastard and Meyuhas make history

During what turned out to be a heavily interrupted season finale at the Circuit de Barcelona Catalunya, Dante Rappange and Kenny Herremans pounced at the very last turn to snatch the first overall victory of the season for the V8 Racing Chevrolet Camaro, as all three titles were decided behind them.

And there was huge drama right from the start, in more ways than one. Having lost out on Saturday, the Silver title appeared to be in the hands of Joulié and Ibañez, who lined their NM Racing Team Mercedes-AMG up on the front row alongside the pole-sitting Allied Racing Porsche of Alexander Hartvig/Moritz Wiskirchen.

As the field approached the rolling start, Joulié got a great launch, so good that he threatened to accidentally overtake Hartvig before the start line. Joulié had to back out of it and the loss of momentum meant he was swamped down the straight and then shuffled wide at Turn 1.

Beating both front-row starters to the punch was Sacha Bottemanne in the #67 Team Fullmotorsport Audi R8 LMS, who found space through the middle to zoom into the lead. However, he would then immediately earn a five-second time penalty by excessively weaving to warm his tyres on the run into the first turn, which is where things started to get complicated.

Simon Tirman spun his Autosport GP Alpine heading into Turn 2 and was hit by the unsighted Aleksandr Vaintrub on the run through. The safety car was immediately called, but as the field slowed there was more contact as Andreas Mayrl’s Allied Porsche, Gregory Curson Faessel’s Saintéloc Audi and Loïc Villiger’s Code Racing Alpine all ended up in the barriers.

Things then got worse when the Am championship-leading W&S Motorsport Porsche in the hands of Solukovtsev had a terminal engine issue. The race attempted to continue as the cars, debris and various fluids were cleared from the track, but with too much mess to safely get back underway the race was paused at the halfway point, with all cars returning to the pits to complete their mandatory driver changes. Once the track was ready again, the race would restart with cars in the same order, behind the safety car. 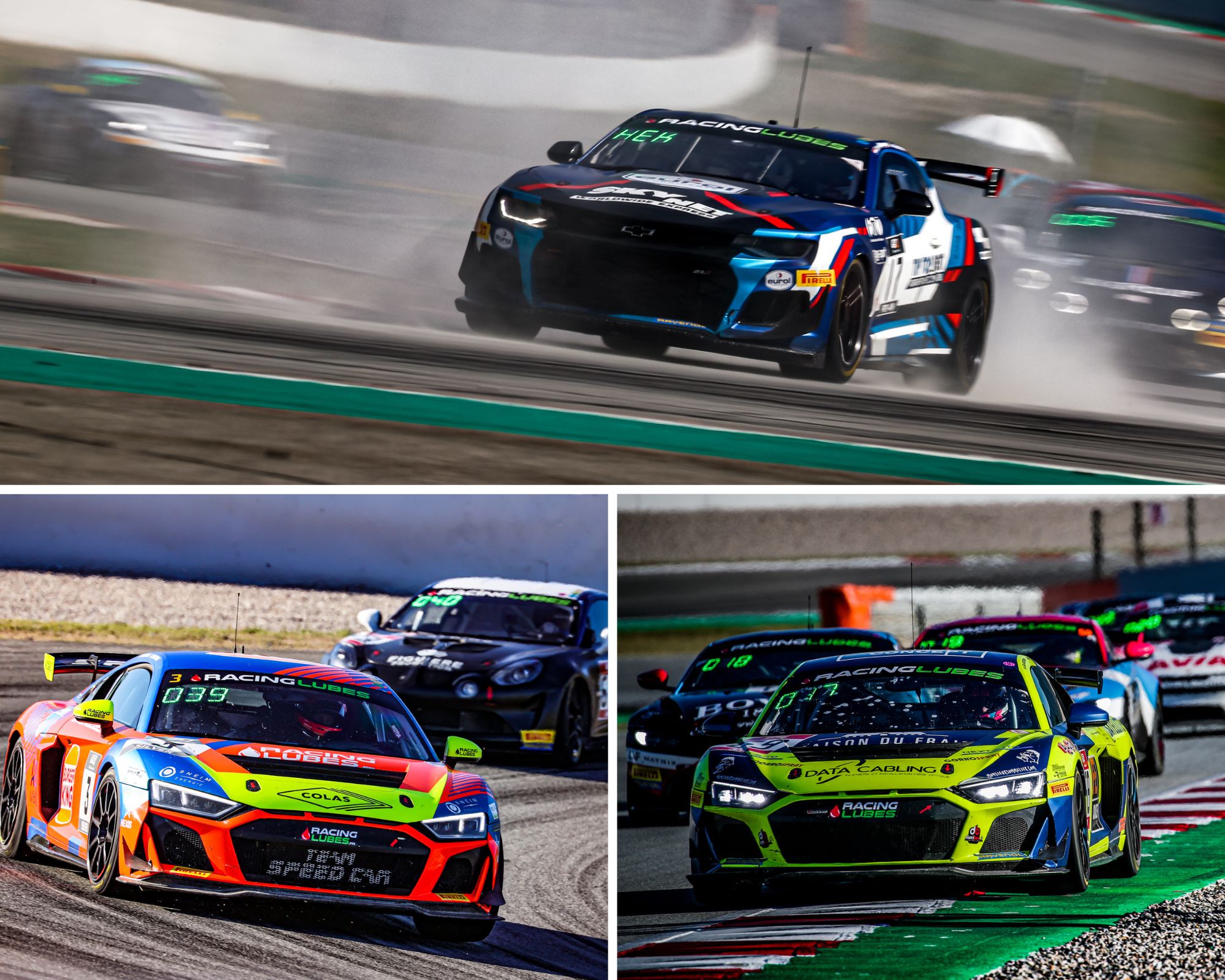 This made for a breathless final 15 minutes of racing, as everybody attempted to make their mark. Marc Lopez had taken the leading Audi over from Bottemanne, but struggled and was quickly shuffled back to sixth at the restart.

First through was Lariche in the Team Speedcar R8, but he had Wiskirchen’s Porsche, Hugo Sasse’s Aston Martin and Rappange’s Camaro right behind. Racing was then neutralised again when Lopez was tipped into a spin by Alex Fontana’s Centri Porsche Ticino Cayman at Turn 1, with his Audi beaching in the gravel. It didn’t take long to clear, and once again racing resumed with four minutes on the clock, at which point Wiskirchen was shuffled into the gravel at Turn 7. That summoned one final full course yellow, which was cleared just as the leaders entered the final sector on the last lap.

That proved crucial for Rappange, who had worked his way past both Wiskirchen and Sasse to run second before the final FCY was called. When racing resumed into the final chicane, Rappange reacted faster than Lariche, getting the jump to put the Camaro ahead into the last turn to snatch victory. Lariche and Consani took second and the Silver win on the road, but were later docked five seconds for not slowing for a FCY period, which dropped them back. That handed the Silver win to Sasse and Ortmann, with Romain Monti/Antoine Potty's Toyota second and Will Burns/Berkay Besler's Borusan Otomotive BMw M4 third completing the class podium. Fontana and Jean-Baptiste Mela/Laurent Hurgon’s Autosport GP Alpine followed the Camaro onto the Pro-Am podium.

With the winners out of the way, the biggest tension came in the fight for the Silver championship. After the drama at the start, Joulié was eventually shuffled back to 19th, three places behind Bastard’s Audi, with just three points separating the two cars in the title chase. Both teams swapped drivers during the red flag, so Meyuhas restarted the final sprint just ahead of Ibañez and, while Meyuhas managed to fight his way up the order to finish an eventual fifth in class, Ibañez struggled to follow him through the pack amid the stoppages. The Spaniard did manage to dive past Konstantin Lachenauer’s Racing Spirit of Léman Aston Martin for seventh right before the final FCY, but even that left him a point shy. That handed the title to Bastard and Meyuhas, just weeks after they claimed the Silver crown in the FFSA French GT Championship. They therefore become the first Silver crew ever to win both the French and GT4 European Series titles in the same season.

There was a tense contest for the Pro-Am crown too, as Guilvert/Michal pushed hard to overcome Beaubelique and Pla’s points advantage. The Audi would wind up fifth in class, leaving it some way short of the Akkodis ASP Team Mercedes, which could cruise to 12th to finally secure the title for Beaubelique and Pla, even if they failed to score for a second race this weekend.

Engine failure can’t deny Solukovtsev and Loboda the Am crown

It was a similar story in the Am class, as Solukovtsev and Loboda were forced to sit and watch after their engine expired early on. But, with Mauro Ricci needing to be second at worst to overhaul the W&S Motorsport crew, they were never really threatened. Especially when Ricci and Fabien Barthez’s car hit trouble and finished ninth.

In the race itself, Christophe Hamon and Michael Blanchemain emerged as clear victors, making up for the win they lost on Saturday. Florent Grizaud and Kévin Jimenez completed a superb debut weekend with second place in the GPA Racing Aston Martin, as Henrik Lyngbye Pedersen and Markus Lungstrass completed the podium in their Team Spirit Racing Aston Martin.

As for the Teams' championships, Saintéloc snuck ahead in the Silver class by two points from NM Racing Team. Akkodis ASP Team did the double by taking both the Pro-am and Am class championships, edging past W&S Motorsport by two points in the Am ranks after the German team’s non-score in the finale.

All eyes now look ahead to 2023, when the GT4 European Series will return at Monza in Italy, next April.