NM Racing Team duo Enzo Joulié and Lluc Ibañez celebrated a clean sweep of victories at Misano, with their #15 Mercedes-AMG leading every lap of the second race to put them in the driving seat of the Silver Cup championship.

NM Racing Team duo Enzo Joulié and Lluc Ibañez celebrated a clean sweep of victories at Misano, with their #15 Mercedes-AMG leading every lap of the second race to put them in the driving seat of the Silver Cup championship.

That, combined with yet more trouble hitting the top two crews in the championship, has put the pair in control of the Silver Cup title fight.

Andrey Solukovtsev and Mikhail Loboda won Am on the road in their W&S Motorsport Porsche, but were put back by a 45-second penalty for contact, allowing Benjamin and Mauro Ricci to take their second Am win of the weekend in the #61 Akkodis ASP Team Mercedes-AMG.

Following on from their class win on Saturday, Enzo Joulié and Lluc Ibañez added the outright race victory with a dominant performance on Sunday. Joulié used a good start from pole to lead the pack through the opening corners as Moritz Wiskirchen got a great launch to slot into second.

That set up a tight fight between Wiskirchen’s #44 Allied Racing Porsche and Sacha Bottemane’s #67 Team Fullmotorsport Audi. The pair’s fight helped Joulié escape, and he soon held a four-second lead. His hard work was briefly undone by a safety car needed to clear up debris from an accident for the #47 Greystone GT McLaren. But once racing resumed, Joulié simply re-built his lead from the restart as those behind him battled.

The Frenchman was a handful of seconds clear by the time he pitted, and when Ibañez took over and rejoined over eight seconds clear, the job was done. The result also proved huge in the championship, with the #10 Racing Spirit of Léman Aston Martin of Gus Bowers and Konstantin Lachenauer retiring with overheating, and the #24 PROsport Vantage of Mike David Ortmann/Hugo Sasse going off with a front-left puncture on the opening lap. The result means Joulié and Ibañez now lead the Silver Cup points from Bowers/Lachenauer.

Alexander Hartvig took the #44 Porsche over from Wiskirchen and snatched second back from Marc Lopez in the #67 Audi, which had rejoined ahead after the stops. Lopez would also lose out to the Romain Monti/Antoine Potty CMR Toyota GR Supra before the end, but held on to fourth to record the car’s best finish of the season so far.

Alpine hits the front in Pro-Am

Code Racing Development’s Alpine team of Loïc Villiger and Antoine Leclerc have suffered their fair share of bad luck already this season, but raced to a deserved fifth place overall, securing them the Pro-Am win.

Laurent Hurgon led the way early on in the #55 Autosport GP Alpine after Kenny Herremans suffered a tough first lap and fell back from his class pole position in the V8 Racing Camaro. However, technical problems put Hurgon out mid-race, opening the door for Villiger and Leclerc.

When the order worked out after the stops, Leclerc ran fifth and stayed clear of trouble to grab victory as a great fight for second broke out behind. Gabriela Jílková rejoined second in class in the Drago Racing Team ZVO Mercedes-AMG she shares with Robert Haub, but had the charging Jim Pla right behind in the #87 Akkodis ASP car he’d taken over from Jean Luc Beaubelique. Jílková defended hard, but Pla eventually found a gap into turn one to grab second, with the Drago car taking third before being handed a 45-second penalty for contact. That put Andreas Mayrl and Vincent Andronaco’s Allied Porsche onto the podium, well clear of the Camaro of Herremans/Dante Rappange in fourth. 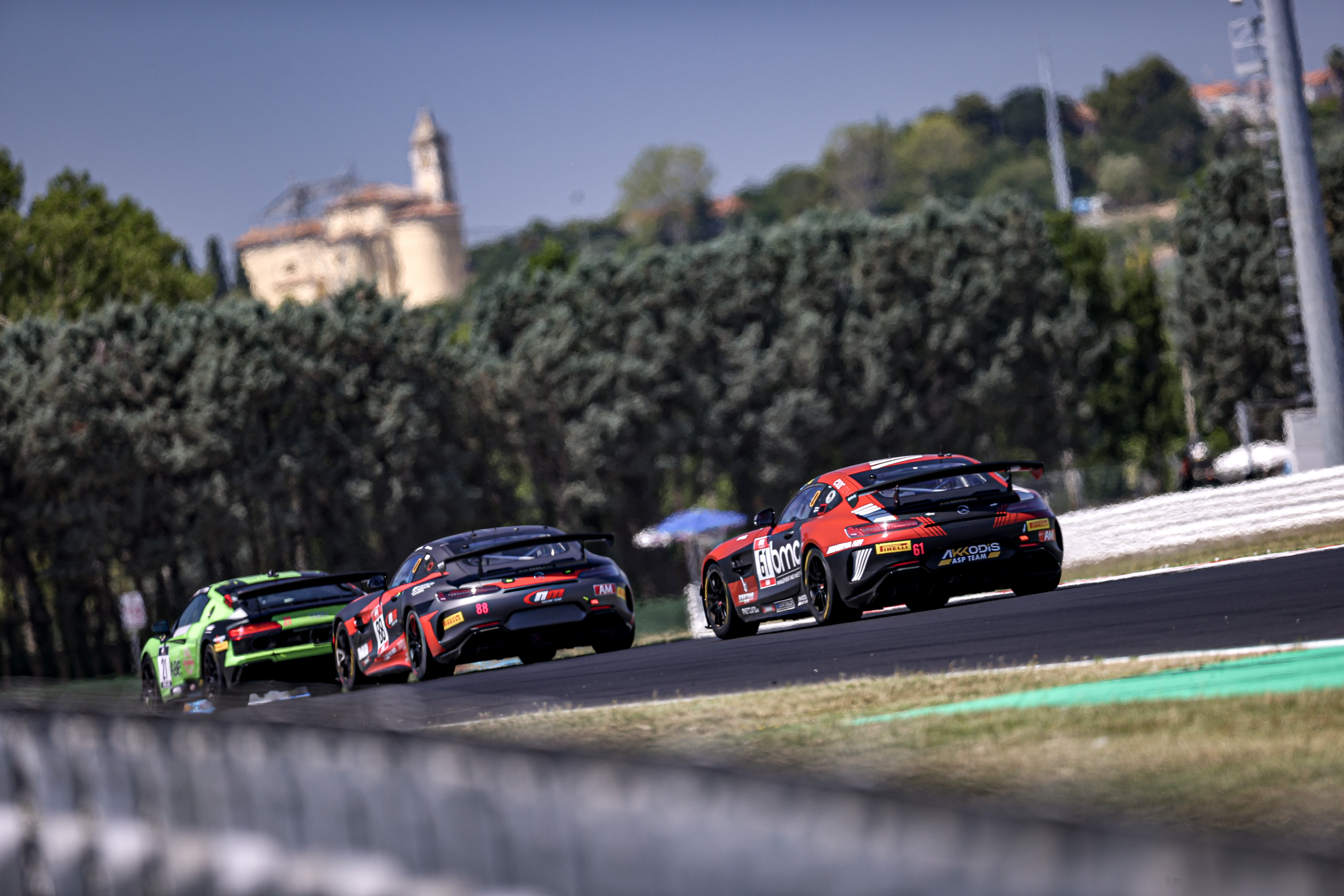 Riccis double up in Am

Benjamin and Mauro Ricci celebrated their second Am win of the weekend after the W&S Motorsport Porsche of Andrey Solukovtsev and Mikhail Loboda was penalised for contact.

The race initially looked comfortable for Team Fullmotorsport’s #69 Audi, with Christophe Hamon leading the entire first half. But Loboda closed in on Michael Blanchemain after the stops and contact between the two sent the #69 Audi spinning. The stewards gave Loboda a 45-second penalty for the incident, dropping the car out of contention.

The Riccis enjoyed a clean race to 21st in their Akkodis ASP Mercedes-AMG to win, putting them firmly in the title fight. Paolo Meloni and Massimiliano Tresoldi were second in the W&D Motorsport BMW, ahead of Aleksandr Vaintrub and Stanislav Safronov, who recovered from an early spin to take a podium place.

It was a disastrous weekend for the AGS Aston Martin of Wilfried Cazalbon and Julien Lambert that had led the class points coming into the weekend. After an accident in testing and another in race one, the team worked through the night to repair the #89 Vantage only for the differential cooling pump to fail, giving them another non-score.

The next round of the GT4 European Series takes place at the legendary Spa-Francorchamps in Belgium, where it will support the TotalEnergies 24 Hours of Spa on July 28-31.