A near-capacity field will roar into Germany for the GT4 European Series’ first-ever visit to the Hockenheimring this weekend as the season enters crunch time for the championship contenders.

With just four races remaining this year – two of which will take place at the Baden-Württemberg circuit this weekend – the destination of each of the championship titles on offer is far from settled, and the margins for error are getting increasingly slim.

This weekend will mark Hockenheim’s first-ever appearance on the GT4 European Series schedule, making it the perfect unknown quantity to mix up the title fights.

It’s been quite a fightback for NM Racing Team’s Enzo Joulié and Lluc Ibañez so far this season. Having endured a tough start to the year at Imola, the pair have been the standout performers since, scoring two wins and three podium finishes from the last six races to lead the way in their #15 Mercedes-AMG. While the last round at Spa-Francorchamps proved a tough one, the pair still did enough to extend their championship lead to 29 points heading into the final four races of the season.

Spa also mixed up the order of their rivals, with Saintéloc Racing’s Roee Meyuhas and Erwan Bastard emerging as the closest challengers to the NM Mercedes. Meyuhas and Bastard had endured a couple of challenging events – limited by overheating issues in their Audi during scorching weekends at both Circuit Paul Ricard and Misano – but the cooler temperatures at Spa allowed them to show their true potential. They grabbed their first win of the season and a second place to shoot up to second in the points.

Early season pace-setters Konstantin Lachenauer and Gus Bowers now run third. The pair struggled with their Racing Spirit of Léman Aston Martin in qualifying at Spa, putting them deep in the pack for the races. They scored just four points all weekend and are now under real pressure to reignite their title charge. They sit a point behind Meyuhas/Bastard.

In fact, second to fourth in the standings are separated by just three points, with PROsport Racing’s Mike David Ortmann and Hugo Sasse still in contention. They were twice winners at Circuit Paul Ricard but have endured mixed weekends since with as many non-scores as podium finishes across the last two rounds.

Watch out for Borusan Otomotive Motorsport’s pairing of Berkay Besler and reigning British GT4 champion Will Burns, who have scored well recently in their BMW M4. Likewise, the Hofor Racing by Bonk Motorsport team that made a superb debut during the last round at Spa is back with reigning GT4 Germany champions Gabriele Piana and Michael Schrey aboard its BMW M4. 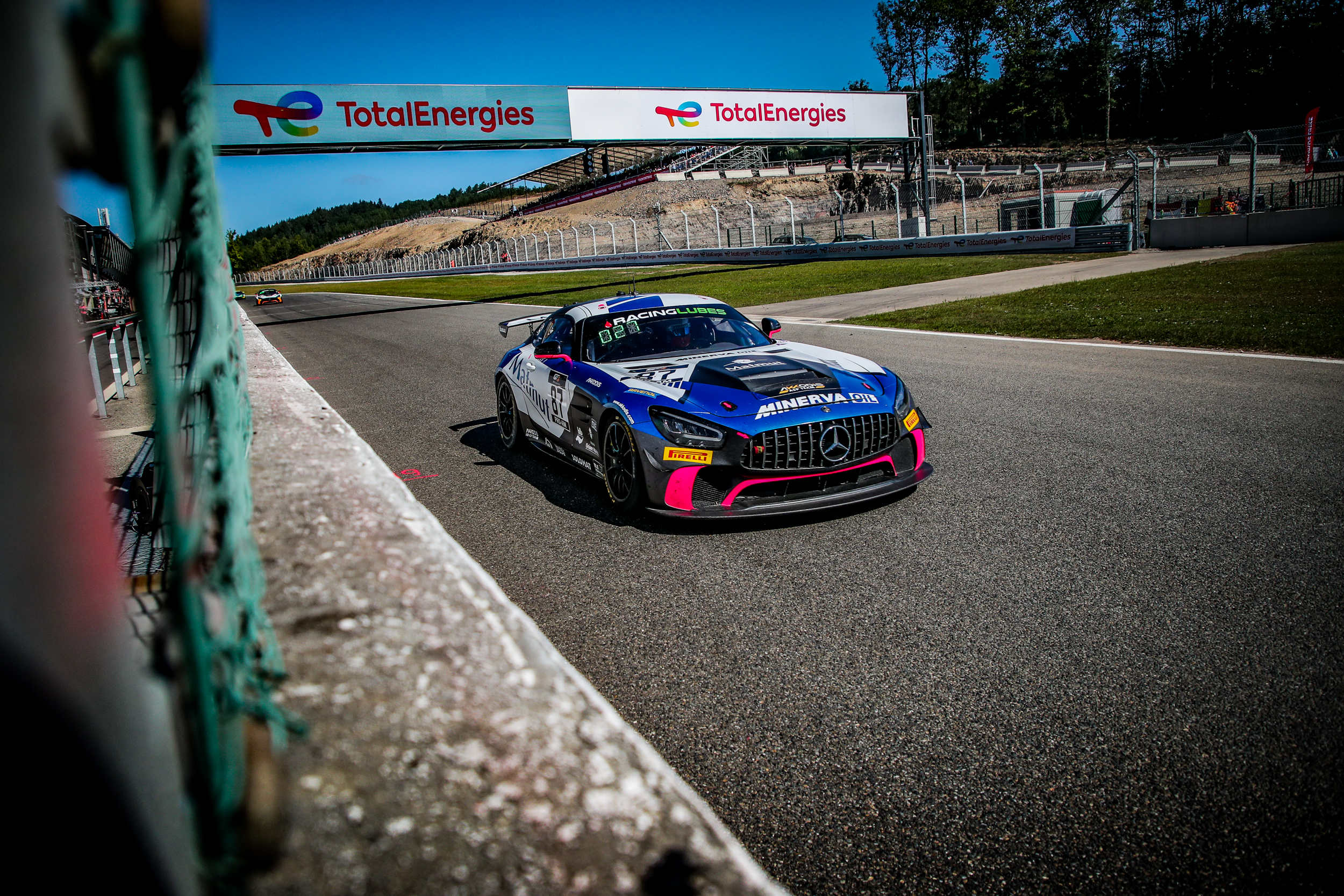 There was a time when it looked like Jean-Luc Beaubelique and Jim Pla may well be in a position to wrap up the Pro-Am title early at this round, but a challenging last event at Spa allowed their rivals to gain back some ground.

The Akkodis ASP Team Mercedes-AMG duo have been in control of the class championship since round two, and appeared to be running away with it after two wins and two podium finishes from four races mid-season. However, an electrical glitch during qualifying at Spa forced their car to start at the back of the monster 55-car field for both races. Regardless, they showed their fighting spirit by still grabbing a healthy haul of points to hang on to their 30-point championship lead.

Things would surely have been closer had Ivan Jacoma and Alex Fontana’s Centri Porsche Ticino 718 Cayman not been caught up in a first-corner tangle in the second race at Spa. They’d successfully closed the gap to Beaubelique/Pla with a second place in race one, but the unlucky retirement put things back to square one.

That drama also opened the door for Saintéloc Racing’s Gregory Guilvert and Fabien Michal to make up ground in the championship. The pair’s first win of the season at Spa moving them into third in the points, just three down on Jacoma/Fontana.

Having emerged as class frontrunners at both Circuit Paul Ricard and Misano, Kenny Herremans/Dante Rappange had a quieter round at Spa, scoring two sixth places in their V8 Racing Chevrolet Camaro to hold fourth in the championship.

Instead, Alpines came to the fore at Spa with Code Racing’s Antoine Leclerc/Loïc Villiger scoring their first outright race victory – the second overall win for a Pro-Am crew this year – at Spa. They followed that up with a second place to move into fifth in the standings. Could it be the start of a late charge for the crown?

Andreas Mayrl/Vincent Andronaco’s Belgian weekend never really got going after a crash put their Allied Racing 718 Cayman out of action, so they'll be keen to get back to winning ways. Simon Gachet and Eric Debard showed strong pace last time out in their Akkodis ASP Team Mercedes-AMG, with their second podium of the season moving them to seventh in the points ahead of Drago Racing Team ZVO’s Robert Haub/Gabriela Jílková. However, Gachet & Debard are set to miss this round. 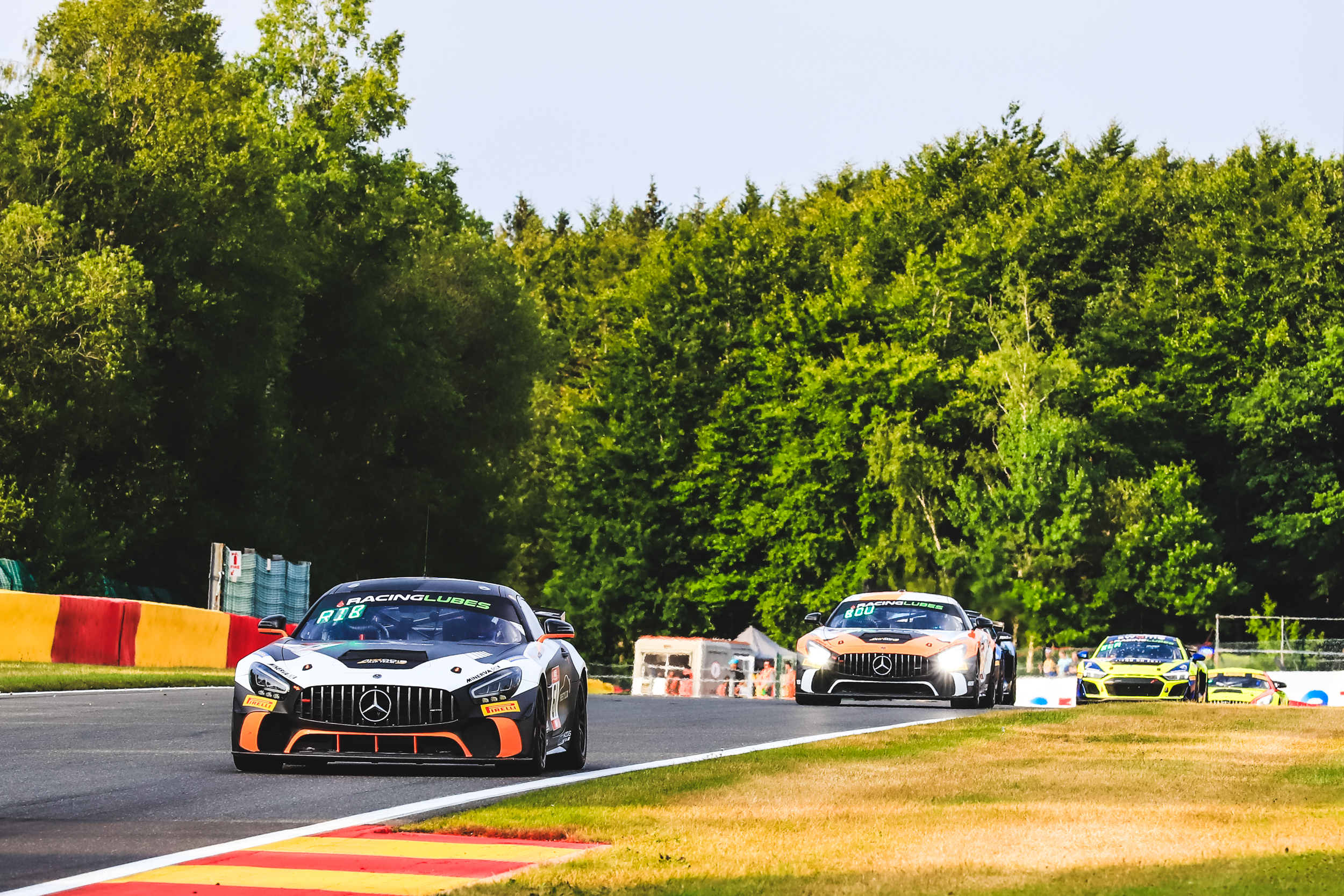 Riccis lead a four-way fight for honours in Am

Things are shaping up to be too close to call in the Am class, with the top four changing on a race-by-race basis.

Father-and-son team Mauro and Benjamin Ricci lead the points courtesy of two wins and three podium finishes in their Akkodis ASP Team Mercedes-AMG, but they’re under huge pressure to hang on to the top spot.

AGS Events crew Julien Lambert and Wilfried Cazalbon are just seven points behind in their Aston Martin, having successfully bounced back from a hard weekend at Misano to return to the podium at Spa.

Mikhail Loboda and Andrey Solukovtsev celebrated their maiden class victory last time out at Spa in their W&S Motorsport Porsche 718 Cayman, and could well have been higher in the standings had it not been for an unfortunate race-two retirement.

Level on points in joint third are Aleksandr Vaintrub and Stanislav Safronov from NM Racing Team. The pair have looked increasingly quick all year in their Mercedes-AMG and could well feature prominently in the title fight.

Currently fifth in the points, reigning class champions Michael Blanchemain and Christophe Hamon face a huge fight to retain their crown in their Team Fullmotorsport Audi R8 LMS. But the duo still undoubtedly have the speed to score wins. Likewise, W&D Racing Team’s BMW pairing of Paolo Meloni and Massimiliano Tresoldi enjoyed their best weekend yet at Spa. They will be keen to go one better than their two second-place finishes so far and push for their first win of the season.