Racing Spirit of Léman made a flying start to the GT4 European Series season with Konstantin Lachenauer and Gus Bowers taking a controlled victory in the opening race at Imola. Allied Racing defied the odds to finish second and win Pro-Am, while Team Fullmotorsport kick-started its Am class title defence with another victory.

Speed and consistency proved key for Lachenauer and Bowers, as did their timing as Bowers managed to drag past the leading Allied Porsche 718 Cayman to snatch the lead right before the final stages of the race were interrupted by a string of caution periods.

Allied’s crew of teenager Vincent Andronaco and late stand-in Andreas Mayrl worked wonders to both lead the first part of the race outright, and then finish second and secure the Pro-Am victory.

In the Am class, Michael Blanchemain and Christoph Hamon recovered from a difficult start to work their way through the field and emerge at the head of the order after the pit window. The victory getting their class title defence off to the best possible start. 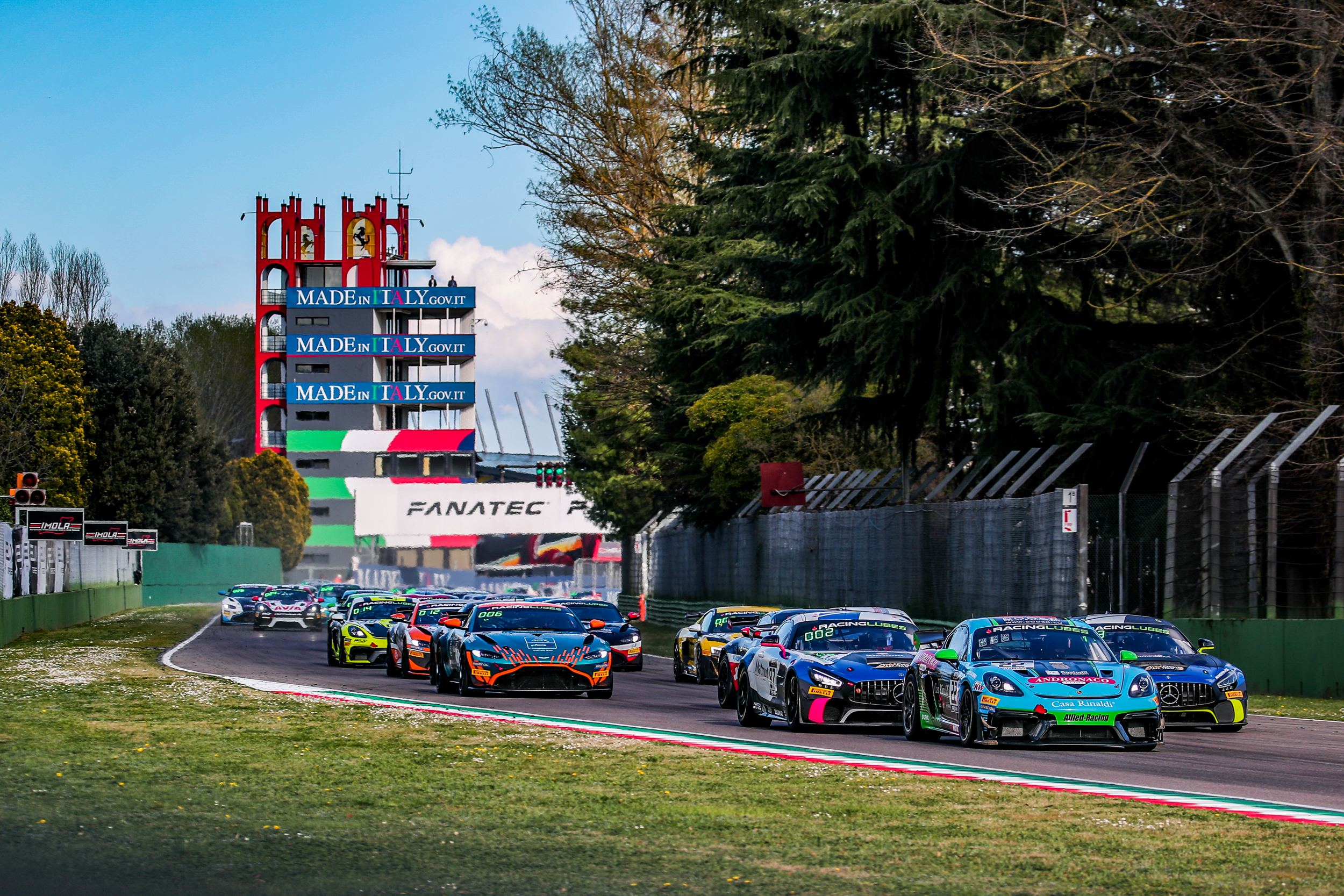 Lachenauer and Bowers pick their moments

Starting from fifth on the grid proved to be no barrier for Racing Spirit of Léman’s Konstantin Lachenauer and Gus Bowers, as the pair carved their way through what became a turbulent opening event at Imola.

The huge 48-car field was greeted by bright and sunny conditions on race day in Italy, but arguably the brightest thing about it was the introduction of teenage sensation Vincent Andronaco, who proved the star of the opening stages.

Having snatched a surprise pole position ahead of Akkodis ASP’s Jim Pla in the morning, Andronaco proved it was no fluke by standing his ground at the start to deny Pla into Tamburello and then proceeded to fend off the charging Mercedes-AMG during the opening stages.

Behind, Lachenauer was on the move, first slipping past Pierre-Louis Chovet’s Arkadia Alpine and then Kenton Koch in the #5 Team Spirit Racing Aston Martin to run fourth. Next he zeroed in on Simon Gachet’s #81 Akkodis ASP Mercedes-AMG and pulled off another pass to bring the Racing Spirit of Léman car into an overall podium place just before the race was neutralised by a full-course yellow caused by the #7 AGS Events Aston Martin stopping on track.

The caution period brought its own issues, as Hugo Sasse’s #24 PROsport Aston Martin made heavy contact with both the #44 Allied Porsche of Alexander Hartvig and the #29 Mirage Alpine in the hands of Mateo Herrero, extending the clean-up period.

Racing resumed right as the pit window opened, and also ruined any advantage Andronaco could pull over the field in the Pro-Am Allied Porsche. Lachenauer was the first to dive for the pits to hand over to Bowers, as Andronaco and Pla continued for another one and two laps respectively trying to find a gap over the Silver Cup Aston. However, when they did eventually make their stops, Andronaco relayed to Mayrl, and he rejoined with just a slender gap over the charging Bowers, who picked his moment to draft past the Porsche and snatch the overall race lead a lap later.

Just as he did, the yellow flags flew again after Antoine Potty stopped the #66 CMR Toyota GR Supra at Acque Minerali, and Thomas Verdier had to pull the #80 AGS Events Aston over with a problem.

The race had been due for a five-minute sprint to the finish, but as soon as it went green again there was more drama as Enzo Joulié and Thijmen Nabuurs made contact fighting over third, sending both the NM Motorsport Mercedes-AMG and the Team Spirit Racing Aston into the gravel, forcing the race to finish under another full-course yellow. 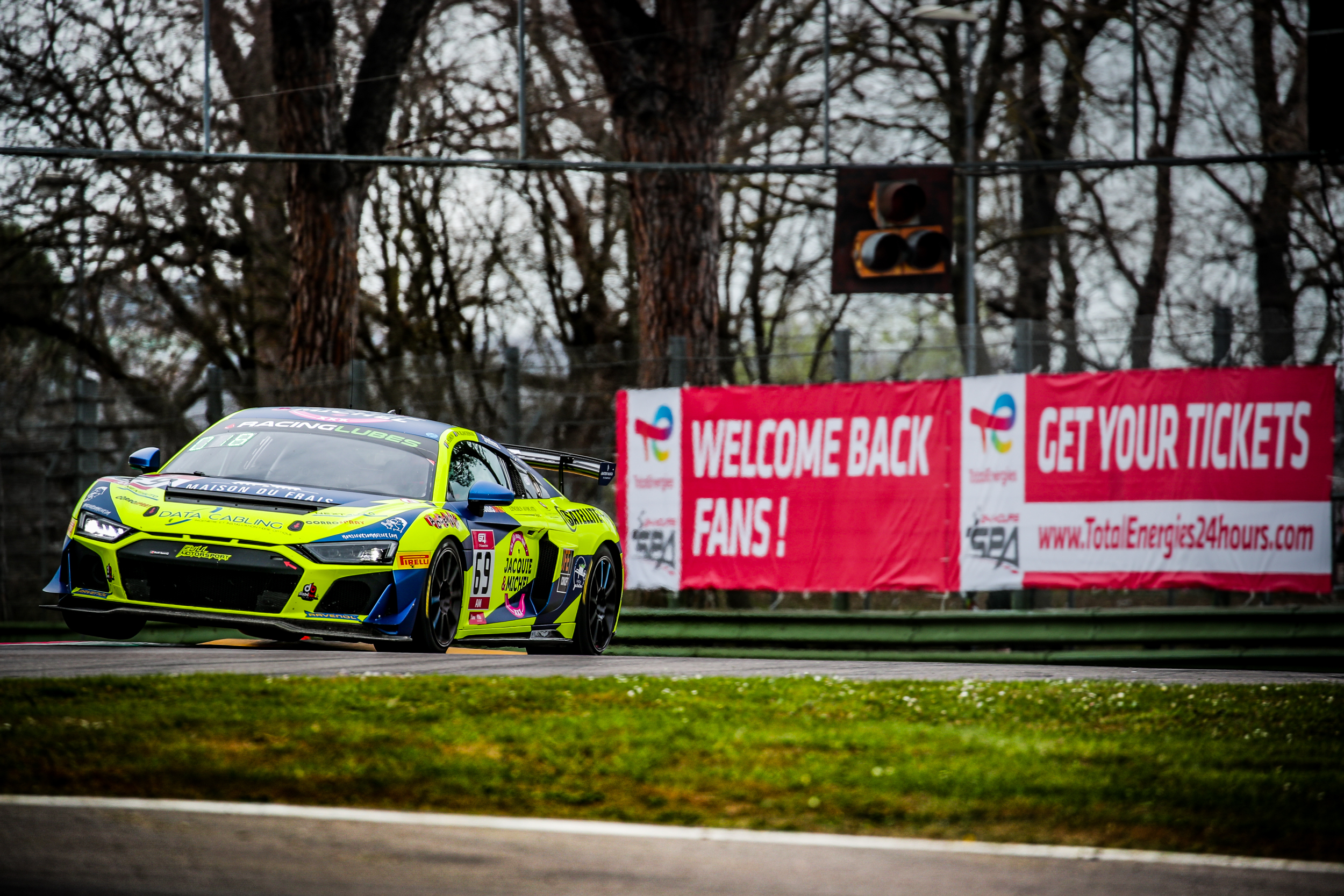 Regardless, victory was secured for Lachenauer and Bowers, with the #13 Arkadia Alpine of Chovet/Johann Boris Scheier inheriting both third overall and second in the Silver Cup. Roee Meyuhas/Erwan Bastard completed the Silver Cup podium with their Saintéloc Audi R8 LMS coming home in fifth overall.

Even if the outright win was lost, Andronaco/Mayrl celebrated a superb Pro-Am victory, with 16-year-old Andronaco proving he will be one to watch this season, and Mayrl being somewhat surprised by the result having only joined the team earlier this week. Jean-Luc Beaubelique and Jim Pla were fourth overall and second in Pro-Am for Akkodis ASP, while Alex Fontana/Ivan Jacoma grabbed the final Pro-Am podium place for the Centri Porsche Ticino team.

Team Fullmotorsport’s Michael Blanchemain and Christophe Hamon again showed why they were the 2021 Am class champions by producing a battling display to win their class from fourth on the grid. Despite initially losing touch with the front three of the Am pack, which was headed early on by Julian Lambert’s AGS Events Aston Martin, the caution periods allowed Blanchemain to keep the trio in sight, and a swift pit stop helped Hamon rejoin and work his way through to the front. W&S Motorsport’s Mikhail Loboda/Andrey Solukovtsev were second in their Porsche, with Wilfried Cazalbon and Lambert completing the podium.