Bastian Buus was the first to take the chequered flag at the 4.675km Barcelona track, securing a win on his return to the series with Allied Racing, while United Autosports drivers Charlie Fagg and Bailey Voisin clinched the Silver Cup drivers’ title with one race remaining thanks to a sixth-place finish.

Pole-sitter Loris Cabirou in the #30 CMR Alpine led the field into Turn 1, with Joel Sturm (#22 Allied Racing Porsche) slotting in behind him in second place and Fabien Michal taking third on the road in the #42 Saintéloc Racing Audi.

Cabirou maintained his lead over Sturm for the first part of the race and had a one-second advantage when contact between the #14 Saintéloc Racing Audi of Clement Seyler and the #27 AGS Events Aston Martin of César Gazeau resulted in a full-course yellow period to pull the latter out of the gravel.

The subsequent safety car bunched up the entire field, but as it pulled in so did Cabirou as a turbo issue forced CMR to retire the Alpine. Sturm benefited to take the lead and by the time the cars had completed another lap the Allied Racing Porsche was already 1.6s ahead of Clement Seyler, with Antoine Potty in the #8 CMR Toyota up into third.

In traffic Seyler managed to close the gap down to one second, before he came into the pits to hand over to teammate Roee Meyuhas at the end of lap 14. Sturm stayed out until the end of lap 16, but traffic cost him time and when teammate Buus returned to the track Meyuhas went around the outside to take the lead into Turn 1. Soon, however, Buus was back in the lead when Meyuhas suffered a puncture and had to make another stop.

Buus controlled the race thereafter and, despite a late full-course yellow that turned into a safety car reducing his lead, he went on to win and give Allied Racing and teammate Sturm their second Silver Cup win of the season.

CMR Toyota drivers Stéphane Lémeret and Antoine Potty finished the race in second place, which wasn’t enough for them to keep their title aspirations alive. Berkay Besler and Cem Bolukbasi completed the Silver Cup podium with the #12 Borusan Otomotiv Motorsport BMW after late-race drama for the #4 Team Speedcar Audi.

With sixth place in class after starting from 11th place, coupled with the CMR crew failing to secure the race win, the Silver Cup Drivers’ championship was decided in favour of United Autosports McLaren pairing Fagg and Voisin. With just one race left tomorrow and a maximum 25 points on offer, Fagg and Voisin are now 34 points clear of Lémeret and Potty. 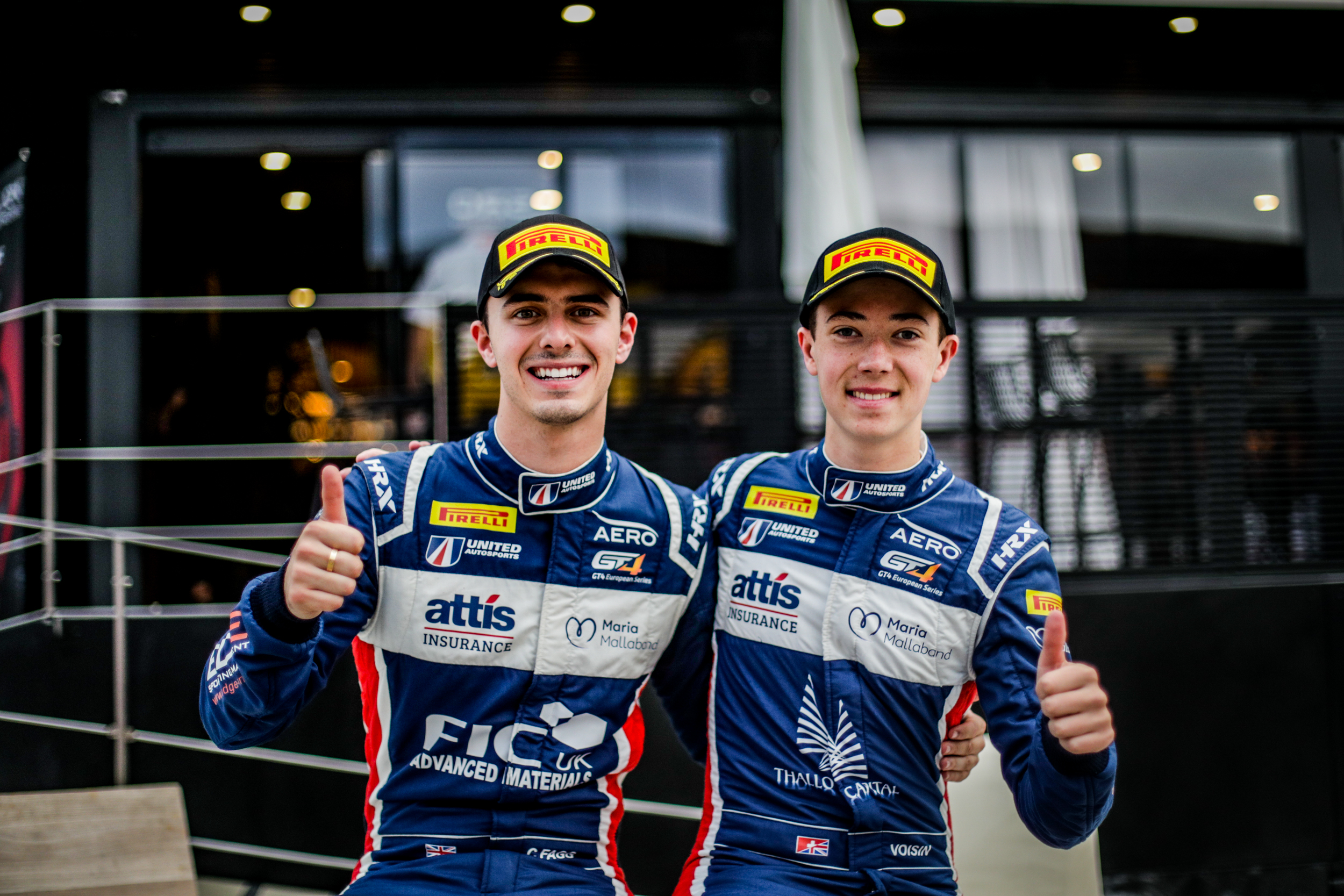 Fabien Michal and Grégory Guilvert in the #42 Saintéloc Racing Audi bounced back from a DNF in the second race at the Nürburgring to secure their seventh win together in the Pro-Am Cup this season.

Michal took third place overall at the start and the Audi drivers stayed out in front and controlled the race in the Pro-Am Cup. After the final safety car phase, Guilvert chased down Buus and he came close to being the first across the line, but ultimately finished 0.453s behind the Silver Cup winner.

Jean-Luc Beaubelique and Jim Pla took another podium in the #87 AKKA ASP Mercedes-AMG, ending the race in sixth place overall, 8.923s behind the #42 Saintéloc Racing Audi. Three minutes from the end Gael Castelli in the #222 Mirage Racing Alpine was in second place in class, but he hit the spinning Team Speedcar Audi of Benjamin Lariche and was eventually classified 10th.

The fight for third place ended with three cars finishing within half a second of each other. Antoine Leclerc and Stephan Guerin (#36 Arkadia Racing Alpine) took third, ahead of the #34 Selleslagh Racing Team Mercedes-AMG of Luca Bosco and Maxime Soulet, and the #2 CD Sport Mercedes-AMG of Jean-Ludovic Foubert and Hugo Chevalier.

Team Fullmotorsport adds another Am Cup class win to 2021 total

Newly crowned GT4 European Series Am Cup champions Christophe Hamon and Michael Blanchemain (Team Fullmotorsport Audi) added another race win to their total in Barcelona. The #69 Audi started the race from pole and Hamon only briefly lost the lead after the first safety car.

After the driver change, Blanchemain restored the order and after 28 laps he was the first driver in the Am Cup to take the chequered flag. AKKA ASP’s Benjamin and Mauro Ricci completed the race in second place, with Benjamin Ricci finishing 10 seconds behind the Audi. Nicolas Gomar and Eric Herr in the #89 AGS Events Aston Martin took the final podium position.

Two laps from the end of the race the order was different. The #7 Street Art Racing Aston Martin was on course for a podium finish, until Theysgens was forced to bring the car back into the pits with a puncture. On the final lap Ricci overtook Gomar to snatch second place. The #50 W&D Racing Team BMW of Paolo Meloni and Massimiliano Tresoldi finished in fourth, ahead of the #33 SVC Sport Management Toyota of Antoni and Piotr Chodzen.