Allied Racing’s Vincent Andronaco and Andreas Mayrl celebrated their first outright GT4 European Series victory in a thrilling penultimate race of the season at Barcelona, while Saintéloc Racing’s Roee Meyuhas and Erwan Bastard surged to within a few points of the Silver championship lead.

A dramatic first race at the Circuit de Barcelona-Catalunya provided plenty of stories up and down the grid, and trouble for the leaders of all three classes guaranteed that the chase for the trio of championships will go down to the season finale tomorrow.

Andronaco and Mayrl bounced back from a grid penalty to claim their second Pro-Am class win of the year, with Mayrl also doing enough to cling on to the pair’s first outright victory ahead of Silver winners Meyuhas and Bastard, who scored their third win from the last five races to close the championship deficit dramatically.

GPA Racing's Florent Grizaud and Kévin Jimenez took an eventful Am class win, but only after a post-race penalty for on-the-road winners Michael Blanchemain and Christophe Hamon's Team Fullmotorsport Audi. 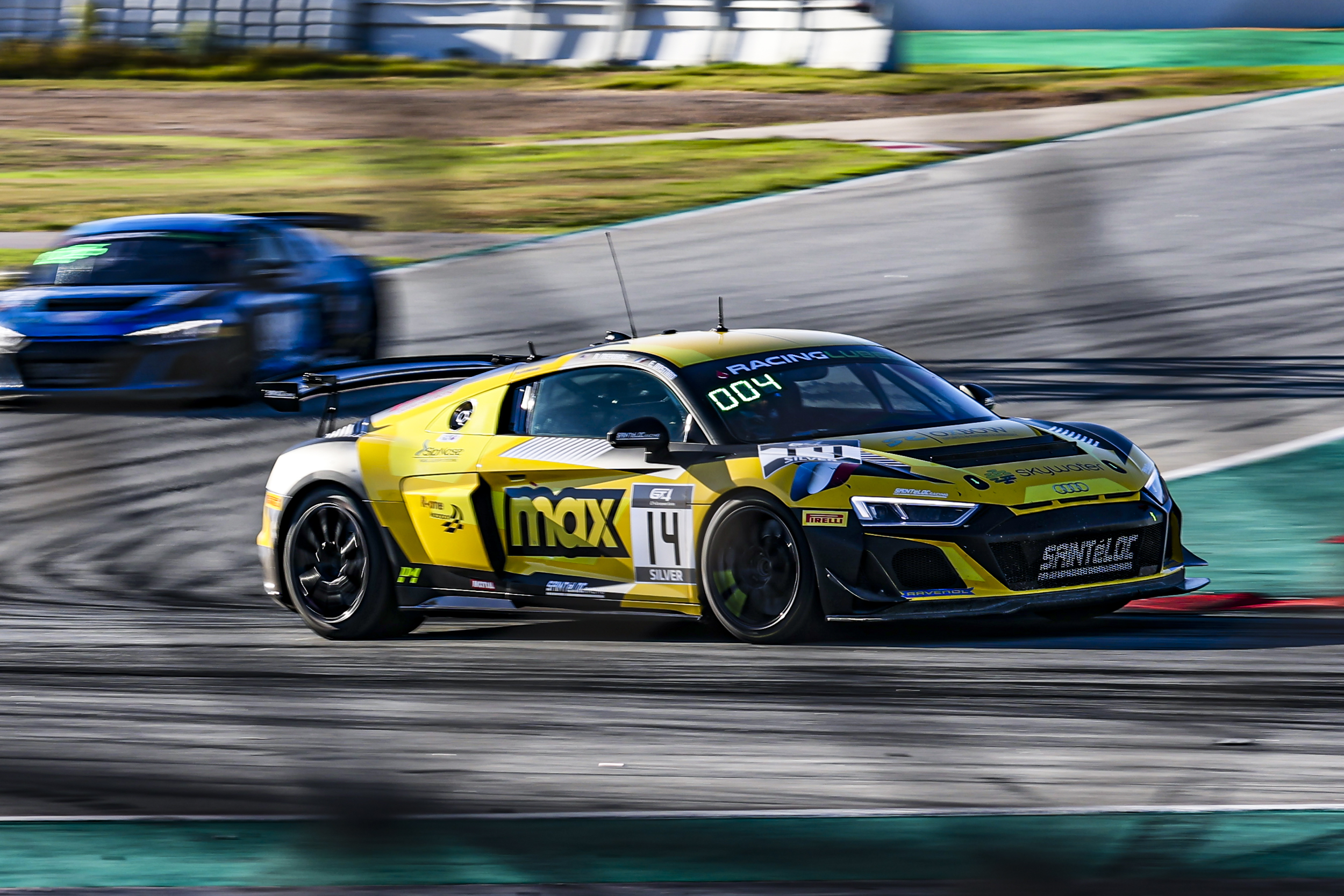 Considering their day started in the gravel trap during qualifying, and then included a grid penalty, it’s fair to say that Andronaco and Mayrl’s victory was a hard-earned one.

Saturday looked to have been spoiled early on when Andronaco got a handful of oversteer through Turn 2 during qualifying, which pitched the #22 Porsche into the gravel trap and brought the session to a halt. However, the car escaped any major damage, and was able to take the restart of the session and Andronaco made the most of the reprieve to grab an unlikely pole position.

Well, he did until Mayrl picked up his third behaviour warning point during his qualifying segment, and in doing so automatically earning the #22 a grid drop. That, combined with a grid drop held over from an incident at Hockenheim, meant Andronaco would start the race from ninth.

However, the drop didn’t matter too much as the German teenager put on a superb opening stint to surge into the lead before half-distance. Alex Fontana inherited pole in the Centri Porsche Ticino Cayman and led the early stages as Etienne Cheli enjoyed a rocket of a start to run second in the CMR Toyota GR Supra.

Andronaco wasted little time in working his way through the order. After some fine overtaking displays he ran third behind Cheli by the end of the fourth lap, and then passed the Toyota for second before pressuring Fontana up front. The two Porsches lapped with just a length between them before Andronaco made a daring dive on the brakes into Turn 1 to slip past Fontana for the lead.

He did so at the ideal time as immediately after the race was neutralised when Moritz Wiskirchen’s sister Allied Porsche was whacked out of the Silver class lead in a clash with Hendrik Still’s W&S Motorsport Cayman, which itself stopped with damage.

The resulting full-course yellow gave the race an opportunity to settle down after a frantic opening period, and when it did it created a chance for those more alert than others. When the race went green again, Cheli was slow to react and was immediately passed by both Gregory Guilvert and Meyuhas in the twin Saintéloc Audis.

Now down to fifth, Cheli defended hard from those behind him, which would itself mix up the order when the pit window opened. Those making an early stop would benefit from getting themselves out of the train of traffic caused by Cheli’s resistance. Hugo Sasse was one of the first to bail from seventh, and the move would benefit he and team-mate Mike David Ortmann later.

The leading pack opted to stay out longer, and when they did eventually complete their stops, Mayrl took over from Andronaco in the lead Cayman, with Jacoma right behind having relayed Fontana. Roee Meyuhas’s fine early work helped Bastard rejoin third, ahead of Michal, who took the #42 Audi over from Guilvert, and Ortmann had vaulted to fifth with another early stopper, Berkay Besler/Will Burns’ Borusan Otomotiv Motorsport BMW, closing in.

With the faster Silver drivers now against the Ams, up front it became a race against the clock for Mayrl to hang on as Bastard worked his way into second and attacked heading onto the final lap. Mayrl ran wide at the La Caixa hairpin allowing Bastard to have a look for the lead, but Mayrl just managed to hang on. Bastard was quite happy to settle for second and the class win, especially with Saintéloc’s main championship rivals, Lluc Ibañez and Enzo Joulié, down in fifth in class in their NM Racing Team Mercedes-AMG.

The race proved damage limitation for Ibañez/Joulié, who started down the order after Ibañez best qualifying lap was lost to traffic and from then on didn’t really have the pace to challenge the frontrunners. They finished eighth overall, but were then put back to ninth by a time penalty for an unsafe release from their pit stop. The result means they lead Meyuhas/Bastard by just three points in the Silver standings heading into the finale on Sunday.

Besler and Will Burns pulled off some superb passes to snatch third overall at the final turn from Jacoma, as Ortmann took fifth and the final place on the Silver podium. Simon Tirman/Paul Cauhape’s Autosport GP Alpine was sixth, ahead of Dante Rappange/Kenny Herremans’ V8 Racing Chevrolet Camaro, which rounded out the Pro-Am podium.

Saintéloc also scored a big result with Guilvert/Michal’s Audi coming home fourth in the Pro-Am class, which was enough to keep their title hopes alive as championship leaders Jim Pla and Jean-Luc Beaubelique suffered a tough race. Starting down the order after suspension problems in qualifying, Pla was stuck behind Cheli before the stops and then Beaubelique was elbowed off in the second half. They finished a disappointed 12th to register their first non-score of the year, though they still lead Guilvert/Michal by 20pts heading into the last race.

GPA takes Am victory on its debut after Hamon/Blanchemain's penalty

GPA Racing's Florent Grizaud and Kévin Jimenez were awarded the Am class victory after a post-race penalty for Christophe Hamon and Michael Blanchemain, which ended their reign as class champions.

Hamon qualified the #69 Team Fullmotorsport Audi well clear of the class competition and the car led the entire race to win comfortably as those behind hit problems. First Andrey Solukovtsev and Aleksandr Vaintrub tripped over each other, with the clash sending Vaintrub’s Mercedes-AMG into the barriers and out of the podium fight. It also delayed the championship-leading W&S Motorsport Porsche, with Solukovtsev limping home in fifth. Then Mirage Racing’s Alpine driven by Alban Lagrange/Frederic de Brabant was penalised for a short pit stop. All of this allowed GPA Racing’s Florent Grizaud/Kévin Jimenez into second, with Saintéloc’s Gregory Curson Faessel completing the podium. But both cars were subsequently moved up to first and second following Team Fullmotorsport's #69 Audi receiving a post-race penalty for a short pit stop, which dropped Hamon and Blanchemain well down the order. That also handed the last podium place to Team Spirit Racing's #18 Aston Martin, shared by Markus Lungstrass and Henrik Lyngbye Pedersen.

However, it also moved championship leaders Solukovtsev and Loboda up a space to fourth, meaning the championship is now a two-horse race between the W&S Porsche and Mauro Ricci’s Akkodis ASP Team Mercedes-AMG going into Sunday.