Gus Bowers and Konstantin Lachenauer completed a dream double at Imola, converting race two pole position into a comfortable victory in their Racing Spirit of Léman Aston Martin on Sunday. Right behind, the Centri Porsche Ticino Cayman of Alex Fontana/Ivan Jacoma took the Pro-Am laurels in second overall, with the AGS Events Aston Martin of Wilfried Cazalbon/Julien Lambert coming out on top of a tight Am class battle.

Racing Spirit of Léman at the double in Imola

Having already taken the top step of the podium once this weekend, Bowers and Lachenauer were perhaps the favourites to do so again on Sunday, with their #10 Vantage starting on pole, courtesy of a superb late qualifying lap from Bowers.

When the lights went out, the British driver made no mistake, closing the door on Vincent Beltoise in the #29 Mirage Racing Alpine to lead the field into Tamburello. Sadly, that was as good as the race got for Beltoise, who was tipped into a spin by Erwan Bastard in the third-placed Saintéloc Audi, which summoned the safety car. Beltoise would be recovered from the gravel but would later by speared into it again after being hit by Noah Andy’s #7 Aston Martin later in the race.

While things got hectic behind, Bowers got his head down at the restart and set about forging a gap back to Bastard, now in second. But the biggest interest early on came from the fight for third. 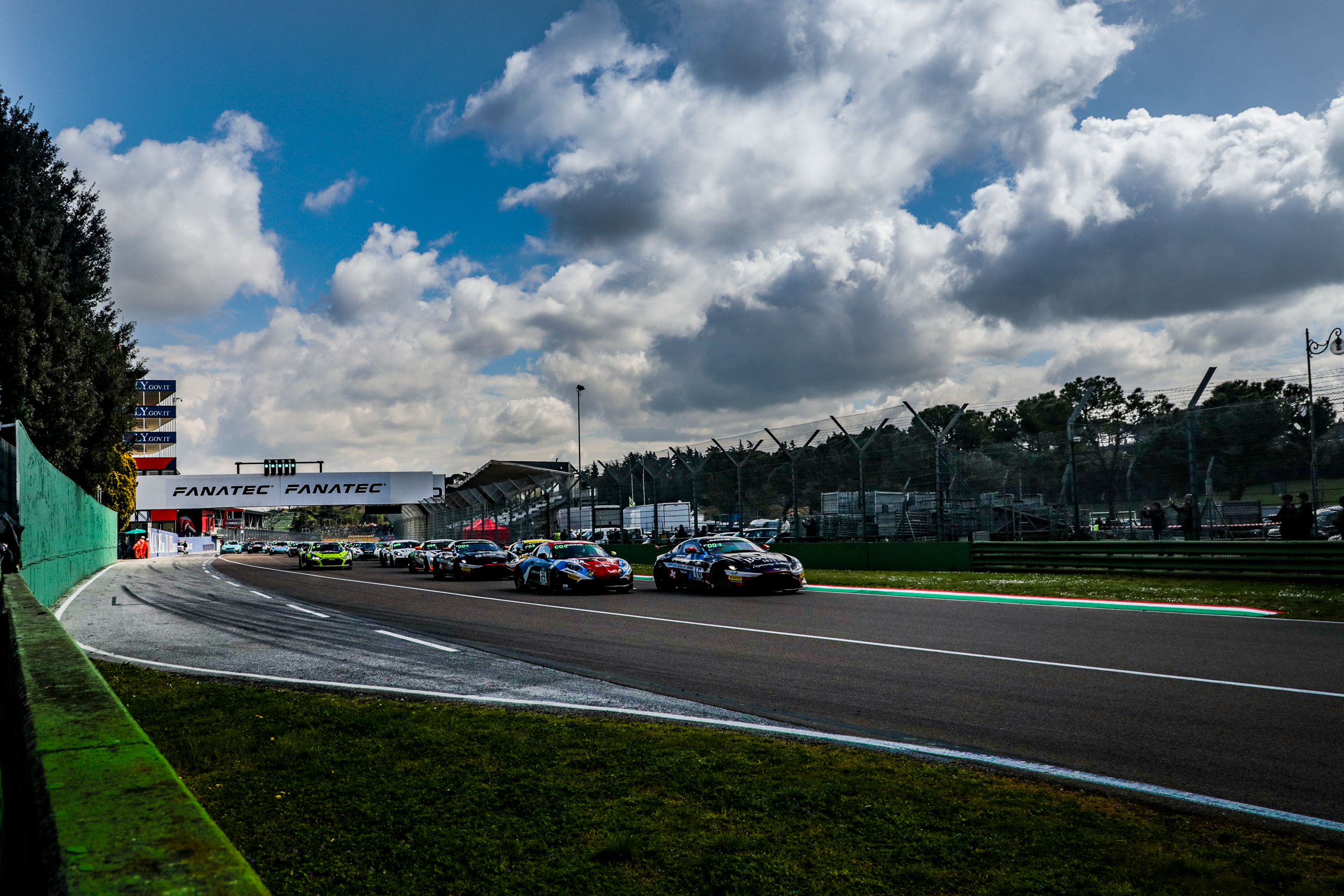 Wilfried Cazalbon had made a terrific start to assume the lead of the Am class and sneak into third overall, with his #89 Aston Martin bottling up both Akhil Rabindra’s #19 Racing Spirit of Léman Aston and the charging Team Fullmotorsport Audi of Christophe Hamon. By mid-distance this developed into a straight three-way fight for not only the final overall podium place, but also for the Am class lead as Hamon repeatedly attempted to find a way past the two Aston Martins.

Things came to a head when Cazalbon got things wrong into Tamburello, skipped across the gravel and somehow Hamon managed to pick his way past both into third overall and the Am class lead.

Up front, Bowers kept Bastard at arm’s length, but was boosted by the news the #14 Audi had earned itself a 10-second time penalty for its part in the clash with Beltoise at the start.

When the pit window opened, Bowers was the first of the pair in, with Bastard staying out to desperately try and claw back some time in the clean air. However, the penalty would ultimately do the damage, and when Lachenauer took the lead Aston over from Bowers he rejoined 10 seconds clear.

It looked like things were settled there and then, but the Centri Porsche Ticino team had executed a superb strategy to emerge as the biggest threat to the leader. Ivan Jacoma had done a great job to hold sixth by the time the pit window opened, and he dived in at the first chance to hand to Alex Fontana. The combination of a swift stop and a quiet pit lane worked wonders, and when the overall order shook out Fontana had risen to second overall, with the car still in the Pro-Am lead.

Roee Meyuhas had taken over the #14 Audi from Bastard and emerged in third, but with Gregory Guilvert crawling all over him in the #42 Saintéloc Audi. With the penalty hanging over him, Meyuhas gave way to the sister car, allowing Guilvert the chance to attack Fontana for the Pro-Am lead. Guilvert closed right onto the tail of the Porsche in the closing stages, but any late challenge would be denied when the #53 Akkodis ASP Mercedes-AMG spun into the gravel at the Villeneuve Chicane and summoned a full-course yellow, which appeared to catch some out, particularly Antoine Leclerc in the #36 Code Racing Alpine who made heavy rear contact with Simon Tirman’s #110 Autosport GP version.

The full-course yellow soon became a full safety car, but with only a few minutes remaining, the clock ran out before racing could restart, confirming Bowers and Lachenauer as the outright and Silver Cup winners, with Jacoma/Fontana holding on to second and the Pro-Am spoils, with Guilvert third overall and second in Pro-Am.

Tom Canning brought the #19 Racing Spirit of Léman Aston he shares with Rabindra home in fourth place to bag second in the Silver Cup, just ahead of the penalised Bastard/Meyuhas Audi. After their starring role during race one, Andreas Mayrl and Vincent Andronaco celebrated third place in Pro-Am and sixth overall in their Allied Porsche Cayman.

The Am fight was also fraught. Hamon led in the Team Fullmotorsport Audi just before the pit window, and it looked like being a comfortable second half also with Cazalbon/Julien Lambert suffering a slow pit stop. With the reigning Am champion out front and hunting a second win of the event it looked settled, until Michael Blanchemain was elbowed wide in traffic and half-spun, allowing Lambert to slip back past in the #89 Vantage right before the yellows flew. Blanchemain recovered for second, a long way clear of the #61 Akkodis ASP Mercedes-AMG of Mauro and Benjamin Ricci, which completed the class podium.

The GT4 European Series next moves on to Circuit Paul Ricard in France for another two races across the weekend of June 3-5.