The British team’s #32 McLaren won from pole position, with the team also sealing the Teams’ title with just one race weekend to go.

Allied Racing took victory in the Pro-Am Cup after a disappointing result on Saturday, while Team Fullmotorsport drivers Christophe Hamon and Michael Blanchemain clinched the Am Cup titles with a fourth win of the season.

Macdonald made a good getaway from pole position and led his United Autosports teammate Charlie Fagg into Turn 1. Only Jim Pla in the #87 AKKA ASP Mercedes-AMG was able to follow the two McLaren drivers, who quickly built a big advantage over the rest of the 41-car field.

During the pit window, United Autosports decided to pit the #23 McLaren first, but Bailey Voisin was unable to leapfrog the #32 McLaren of teammate Bowers. Voisin then ran nose-to-tail with Bowers for the final stint of the race, but the latter made no mistake and prevented Voisin from passing him on the final lap.

When Bowers took the flag Voisin was just 0.328s behind, ensuring United Autosports’ first one-two finish of the season. With the #8 CMR Toyota retiring early in the race and Antoine Potty and Stéphane Lémeret not scoring any points, Voisin and Fagg head to the Circuit de Barcelona-Catalunya with a 44-point lead.

The result also means that with two races remaining the Silver Cup Teams’ title has been decided in favour of United Autosports. After ten races the British squad has scored 192 points, 53 points more than closest rival CMR.

The #13 Team Zakspeed Mercedes-AMG of Theo Nouet and Jan Marschalkowski took third place in the Silver Cup, with Marschalkowski finishing ten seconds behind the two McLarens. Fourth went to the #17 V8 Racing Chevrolet of Thijmen Nabuurs and Jop Rappange, with Nabuurs passing a good number of cars during his stint. Edouard Cauhaupe and Hugo Chevalier (#2 CD Sport Mercedes-AMG) along with the pairing of Xavier Lloveras and Lluc Ibanez (#15 NM Racing Team Mercedes-AMG) completed the top six in the Silver Cup.

Alexander Hartvig and Joel Camathias bounced back from a disappointing opening contest on Saturday to take victory in the second race. The #26 Allied Racing Porsche lost out on a potential race win after missing the pit window but made no mistakes in today’s race.

The #87 AKKA ASP Mercedes-AMG of Jim Pla and Jean-Luc Beaubelique led the class from the start. In the second part of the race, however, Hartvig closed in on Beaubelique and two laps from the end the Danish driver passed Beaubelique before going on to win the race. Beaubelique took second place, with the #19 Team Zakspeed Mercedes-AMG GT4 of Robert Haub and Gabriela Jilkova securing third place in class.

Selleslagh Racing Team took fourth and fifth place, with Moritz Kranz and Jakub Knoll (#35 Mercedes-AMG) beating Luca Bosco and Maxime Soulet (#34 Mercedes-AMG) by two seconds. Ivan Jacoma and Max Busnelli in the #718 Centri Porsche Ticino car took sixth place. Yesterday’s race winners and 2021 Pro-Am Cup champions Fabien Michal and Grégory Guilvert did not finish, after getting involved in an incident in turn 1 at the start of the race.

Christophe Hamon and Michael Blanchemain in the #69 Team Fullmotorsport Audi took a second race win at the Nürburgring and by doing so also clinched the Am Cup title. Blanchemain started the race from seventh on the grid, but soon found himself in the top three.

After the driver changes, Hamon was in second place behind the #7 Street Art Racing Aston Martin of Pascal Bachmann and Paul Theysgens, but on lap 17 he managed to overtake the Aston Martin and move into the class lead.

As others struggled, Hamon pulled away and by the time the chequered flag was waved, the #69 Audi was 11.604s clear of the then second-placed #33 SVC Sport Management Toyota of Patrick Zamparini and Antoni Chodzen. Gregory Faessel in the #21 Saintéloc Racing Audi finished in third place.

With their sole remaining title rival ahead of the fifth round, the #3 CMR Toyota of Andrea Benezet and Wilfried Cazalbon, out of the race early, Team Fullmotorsport, Hamon and Blanchemain have sealed the Am Cup Drivers’ and Teams’ titles with two more races to go.

The final round of the 2021 GT4 European Series season will take place at the Circuit de Barcelona - Catalunya on October 8-10, 2021. 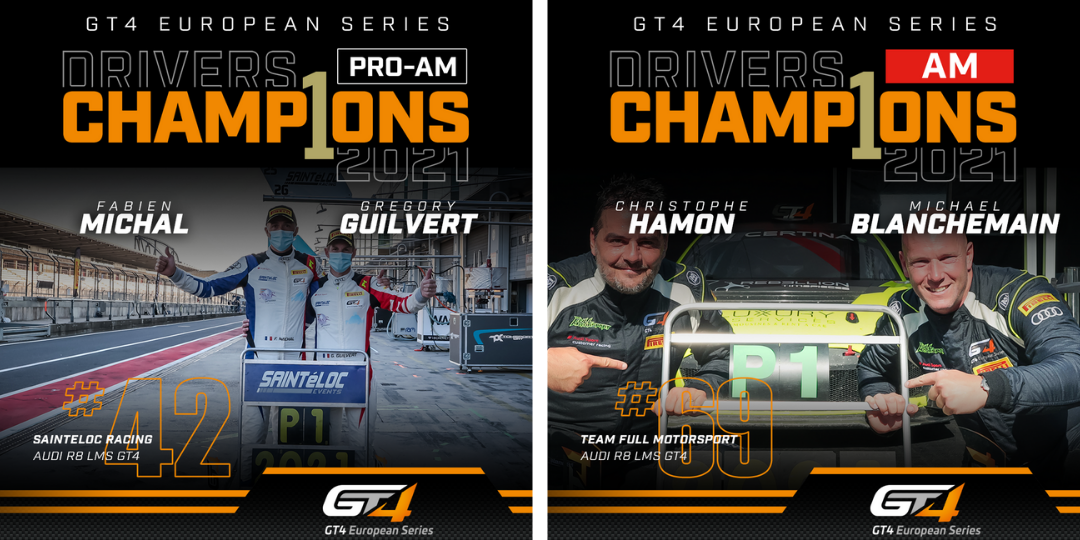