In perfect weather conditions, 41 cars took the start of the ninth round of the 2021 campaign, which saw Zakspeed duo Theo Nouet and Jan Marschalkowski cross the line in first place after 28 laps. French drivers Fabien Michal and Grégory Guilvert clinched the Pro-Am Cup title with their sixth victory of the season for Saintéloc Racing, while Christophe Hamon and Michael Blanchemain fought back from a spin to win in the Am Cup for Team Fullmotorsport.

Pole-sitter Bailey Voisin got away well at the start, and it was the #23 United Autosports McLaren that led the sister #32 car of Gus Bowers into turn 1, with Marschalkowski (#13 Team Zakspeed Mercedes-AMG) following in third position. On lap 2, however, Bowers ran wide at turn 15 and Marschalkowski moved into second place. Behind them, Thijmen Nabuurs (#17 V8 Racing Chevrolet) found himself in fourth after losing a couple of places at the start.

Race leader Voisin maintained a steady one-second gap over Marschalkowski until the pit window opened. Bowers was the first driver to come in, handing over the #32 McLaren to Dean Macdonald, while Voisin came in one lap later. When Charlie Fagg returned the #23 McLaren to the track he was still in front of his teammate, but the British driver hit traffic on his first lap out of the pits. With Team Zakspeed making no mistakes during their stop, Nouet jumped into the lead as he exited the pit lane.

Nouet and Fagg battled for the lead in the first couple of corners, but it was the 2020 GT4 European Series Silver Cup champion who managed to keep the #13 Mercedes-AMG ahead of the hard-charging United Autosports man. Meanwhile, behind the first two cars, Jop Rappange (#17 V8 Racing Chevrolet) closed in on Macdonald.

On the final lap Fagg did his best to catch the leading Mercedes-AMG, but it was Nouet who was the first to take the chequered flag and win the weekend’s opening race at the Nürburgring. Fagg clinched second place, 0.669s behind Nouet. Macdonald was third in class, while Rappange only just missed out on a podium finish, crossing the line 0.257s behind the third-placed McLaren.

There was drama for Silver Cup title contenders Stéphane Lémeret and Antoine Potty early in the race, as the #8 CMR Toyota dropped down the order and ultimately ground to a halt at turn 1. Lémeret managed to return to the pits, where the French team retired the car.

With three races remaining Voisin and Fagg now hold a 26-point lead over Lémeret and Potty. Lluc Ibanez and Xavier Lloveras are third in the Silver Cup standings, 80 points behind the leading United Autosports duo. 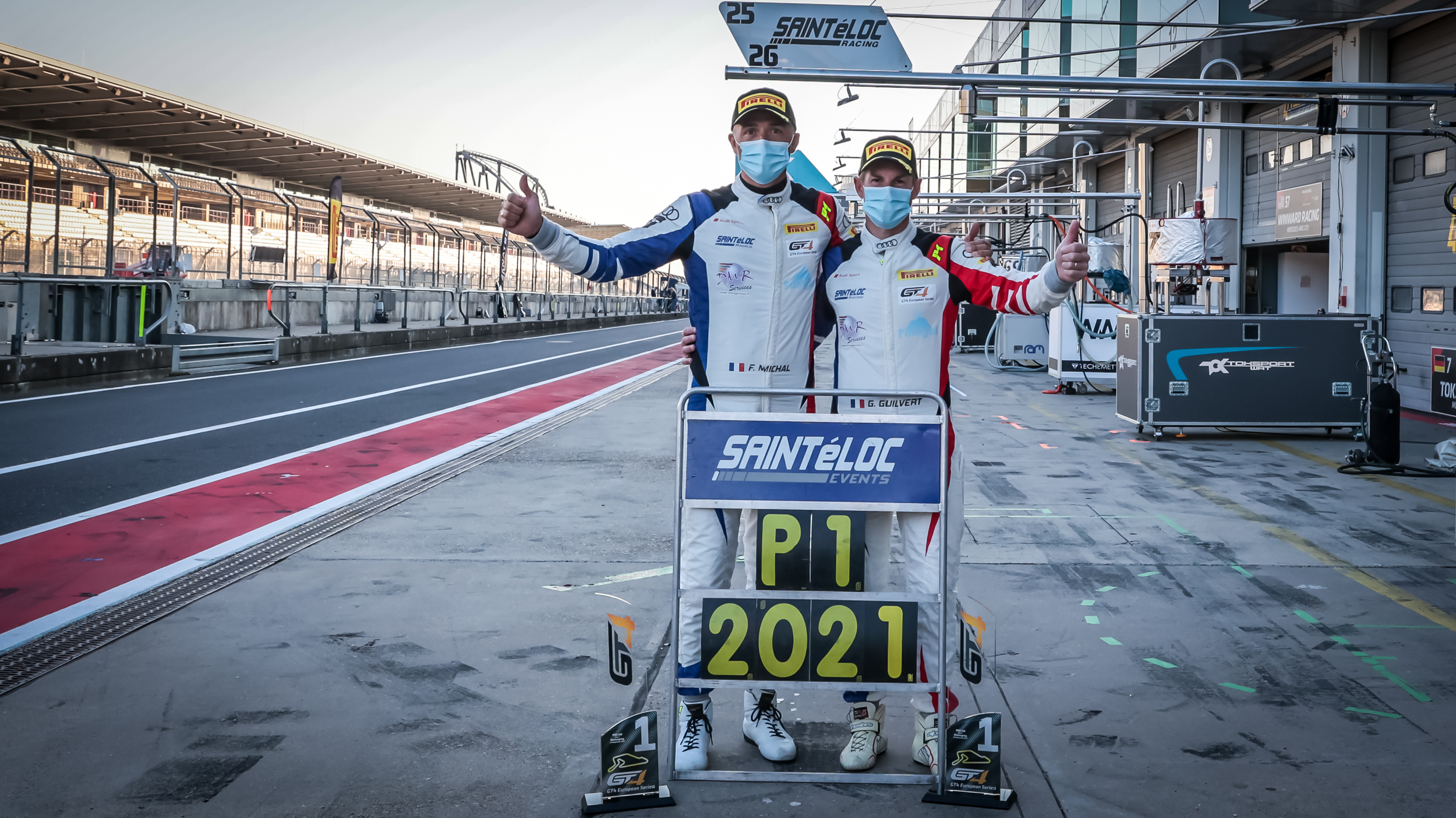 Fabien Michal and Grégory Guilvert (#42 Saintéloc Racing Audi) wrapped up the Pro-Am Cup title early with their sixth win of the season. The French drivers started fifth in class but gradually made their way to the front. By the time the pit window had opened the #42 Audi was already in third place.

After the pit stops Guilvert passed the #35 Selleslagh Racing Team Mercedes-AMG for second on lap 19 and moved into the lead when the #26 Allied Racing Porsche served a drive-through penalty for making its stop outside the pit window.

When he took the flag, Guilvert had made it all the way to eighth overall, finishing 10 seconds ahead of the second-placed #11 Borusan Otomotiv Motorsport BMW of Hasan Tansu and Yagiz Gedik. Luca Bosco and Maxime Soulet (#34 Selleslagh Racing Team Mercedes-AMG) clinched third place, ahead of teammates Moritz Kranz and Jakub Knoll in the sister #35 car. Jean-Luc Beaubelique and Jim Pla (#87 AKKA ASP Mercedes-AMG) and Filip Vava and Rafael Villanueva (#126 NM Racing Mercedes-AMG) completed the Pro-Am Cup top-six.

The race win means Guilvert and Michal have collected 202 points so far and, with only three races and two qualifying sessions remaining, the Saintéloc Racing Audi drivers cannot be overtaken and will take the championship trophy back to France at the season’s end.

From spin to Am Cup win for Hamon and Blanchemain

Christophe Hamon and Michael Blanchemain (#69 Team Fullmotorsport Audi) fought back from a spin to take a race win in the Am Cup. Hamon had taken the lead right after the start but dropped back to second place behind the pole-sitting #18 Hella Pagid - racing one Aston Martin after contact with a rival competitor.

In the second part of the race Blanchemain moved back into the lead and the #69 Audi crossed the line with a five-second advantage over the #33 SVC Sport Management Toyota of Patrick Zamparini and Antoni Chodzen. Pascal Bachmann and Paul Theysgens (#7 Street Art Racing Aston Martin) scored third in class, ahead of the #50 W&D Racing Team BMW of Paolo Meloni and Massimiliano Tresoldi. Gregory Faessel (#21 Saintéloc Racing) and Nicolas Gomar and Eric Herr (#89 AGS Events Aston Martin) completed the Am Cup top-six.

The teams will be back on-track tomorrow morning at 10.00 for the second one-hour contest of the weekend. The race will be shown live on the GTWorld and GTWorld Français YouTube channels, as well as the GT4 European Series website and Facebook page.
___